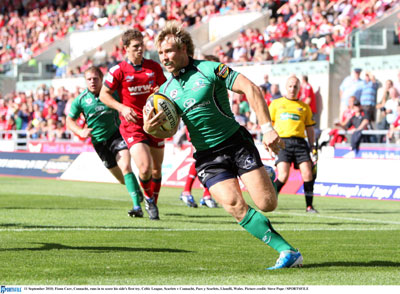 Hooker Richardt Strauss has extended his contract until 2013.

Dominic Ryan (21) has also signed a fresh two year deal having featured in 22 games so far this season. The Gonzaga College SJ graduate has also scored four tries in both competitions to date.

Meanwhile, centre Brendan Macken and out-half Ian Madigan have extended their current deals while half backs John Cooney and Ian McKinley have both also signed their first professional deals with the province.

Galway native Browne (30) is a former Ireland Under-21, Connacht and Northampton Saints lock who joins from French Top 14 club C.A. Brive having featured in 30 games so far this season.

Former Leinster Academy graduate Carr (25), meanwhile, returns to his home province having impressed for Connacht and he is the highest try scorer in the western province’s history (34 tries in 72 Magners League/Amlin Challenge Cup games) since his move from Leinster in 2008. The Newbridge winger has also represented Ireland at Schools, Under-19, Under-21 and ‘A’ levels.

Commenting on the new deals Leinster Coach Joe Schmidt said: “We are delighted to announce the signings of two Irish qualified players in Damian and Fionn and we believe that both players have the potential to make an impression over the coming season.

“I know how enthusiastic both players are about linking up this summer, in Fionn’s case his arrival will be a homecoming of sorts as he is a graduate from the Leinster Academy.