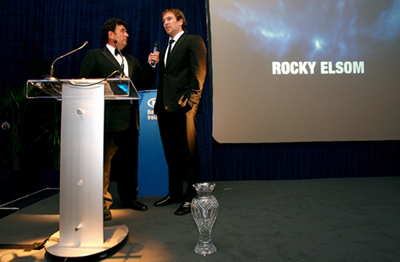 Rocky Elsom has been named the Bank of Ireland Leinster Player of the Year at a gala awards ceremony in the Burlington Hotel, Dublin on Saturday night…

The towering Australian international back-row forward has been a virtual ever present in Leinster’s Magners League and Heineken Cup campaign since signing for the province last summer. The 26-year-old has made a significant contribution on and off the field and in 20 starts to date has scored six tries, including two tries in all eight of Leinster’s Heineken Cup games to date.

Commenting on the award, Rocky Elsom said: “I have to thank the team for what has been such a great year. I’ve had a lot of support from the team and the coaching staff and it has been really obvious to me how much of an impact they’ve had on my season. I can’t say enough how much I appreciate it.

“In particular I would like to thank Michael Cheika for getting me over here in the first place, because it took a hell of a long time and a lot of work, so I appreciated that effort.

“I liked Dublin a lot before I came to Leinster, but I didn’t expect to have enjoyed it as much as I have and I would say the main reason for that is that I’ve really liked being around the team. The highlight of the year so far was the match last week.

“Also, the Leinster supporters have been fantastic all season. I would say that indirectly they are one of the major reasons why the team has been so successful. Their ongoing support of the club and the team has been extremely impressive.

“I have felt privileged to have come to a side that has such passionate and dependable supporters. It has made my time here that much more enjoyable and I cannot thank them enough.”

The awards ceremony celebrated what has been another outstanding year for Leinster Rugby at all levels of the game.

Leinster and Ireland rugby legend Dr Bill Mulcahy was inducted into the Guinness Hall of Fame. Mulcahy, a former UCD, Bective Rangers and Skerries captain, played on two Lions tours in 1959 (to Australia, New Zealand and Canada where he played in 15 of the 33 tour games) and the 1962 tour to South Africa (where he played in 17 of the 24 tour games including all four Tests, scoring one try). In total he played 40 times for Leinster (1955-69) and made 35 starts for Ireland over eight seasons, which included Ireland’s first test victories over Australia (1958) and South Africa (1965). A hugely popular administrator, he became Skerries’ first President of the Leinster Branch in season 1995/96, incidentally the inaugural year of the Heineken Cup.

Cian Healy picked up the Powerade Young Player of the Year award after a string of outstanding performances in both the Magners League and Heineken Cup competitions. The Clontarf prop burst on to the Leinster scene at the end of the 2006/07 season and to date this season has featured in 23 Senior games.

Navan’s Bernard Smyth was awarded the Junior Club Player of the Year after helping the Meath side to the Leinster League Division 1 title and subsequent promotion to the All-Ireland League. Progressive side Coolmine RFC, meanwhile, lifted the Canterbury Club of the Year after their first and second XV’s won their respective leagues, while their state-of-the-art facilities have been used extensively for key knockout Leinster Branch fixtures. They continue to thrive at Mini’s and Youths levels and retain a strong local identity in the west side of Dublin.

Blackrock’s Grace Davitt picked up the Philips Ladies Player of the Year award after an excellent season for club, province and country. Terenure College, meanwhile, marked an excellent year where they won the Leinster Schools Junior Cup title and were also beaten finalists in the Senior Cup competition, by picking up the Powerade School of the Year honour.

Meanwhile, Felipe Contepomi was presented with the Official Leinster Supporters Club (OLSC) Leinster Legend award on behalf of the supporters. The award was presented on Friday night at the RDS as thousands of supporters bade him a fond farewell.

RTE personality Des Cahill was MC on the night.