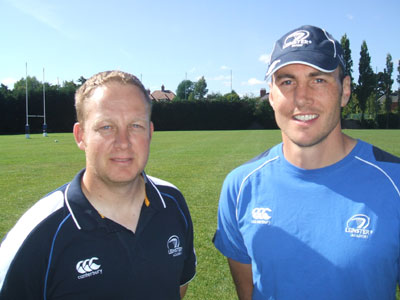 Former Leinster and Ireland full-back Dempsey ended an illustrious playing career with the province in May after making 175 provincial appearances which included Celtic League, Magners League and Heineken Cup honours. A former Ireland Under-21 and ‘A’ cap, the Terenure College full-back represented Ireland on 82 occasions; featuring in two Rugby World Cups and was part of the Ireland team that won Triple Crowns in 2004, 2006 and 2007. In recent years he has assisted his former alma mater as well as Terenure College RFC in the All-Ireland League.

Mitchell was appointed Coach Development Officer with Leinster Rugby in September 2009 after joining Leinster Rugby in September 2006 as a Rugby Development Officer (RDO) for the North East area. Originally from South Africa he graduated as a primary school teacher at Pretoria Teachers Training College (South Africa) in 1999. He successfully represented the Blue Bulls Schools at Under-13, 18, 19 and 21 levels and since arriving in Ireland in 2001 he has been involved in playing and coaching at various levels that includes Boyne RFC, head coach of the Leinster Youths and was part of the Belvedere College SJ coaching team that won the Leinster Schools Senior Cup in 2008.

The duo will work closely with Academy Manager Colin McEntee in helping to identify club and schools players from across the province in both traditional and non-traditional areas. In addition, they will also act as Assistant Coaches to the province’s Under-20 representative side alongside Head Coach Gabriel Fulcher.

Taking over from Richie Murphy who was promoted to the position of Leinster Senior Skills and Kicking coach earlier this summer, the expanded roles for Dempsey and Mitchell reasserts the province’s commitment to nurturing the next crop of talent by broadening the province’s underage playing and coaching set-ups.

Commenting on his new role Girvan Dempsey said: “I am thrilled to have the opportunity to continue my long association with my home province in this exciting role. Leinster’s underage set-up is amongst the strongest in Europe and the challenge over the coming years will be in maintaining and improving the standards as well as the playing numbers.

“I have always enjoyed working with younger players and I’m looking forward to working alongside Wayne and Colin to help improve the elite players in the various club and schools Age Grade representative sides.”

Wayne Mitchell added: “I have been working with Leinster for the last four years as first a Rugby Development Officer and more recently as a Coach Development Officer. The challenge will be to identify the right players and create an environment for these players to compete at the highest level. A lot of time and energy has already been invested in player development and this year we have moved a year backwards so as to identify players at Under-16 level, which opens the door further for players to have more opportunities to come through the system.

”I am excited by this opportunity to work with the next batch of underage players and it is an honour to be recruited as part of Leinster’s established pathway for developing coaches within the provincial system.”