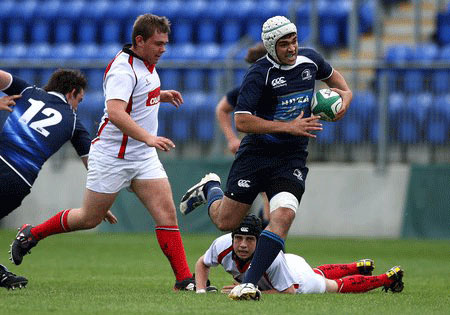 Three Leinster Age Grade sides, the Leinster Club Under-18s and two Under-19 teams, were in action against Ulster in Donnybrook on Saturday afternoon…

Click HERE to see the Galleries from all three games

A strong second half showing by the Leinster Under-18 (Clubs) team, sponsored by Nivea for Men, helped them defeat Ulster 36-8 in Donnybrook in Saturday afternoon’s interprovincial.

It was a tale of two halves as Leinster dominated the early exchanges and Navan back-row Akhlaque Khan crashed over for the first of his two tries on 23 minutes. Khan doubled Leinster’s lead six minutes later before Ulster struck back in the 33rd with a penalty from the boot of out-half Adam Doherty.

Then on the stroke of half-time Ulster centre Jay Malcolm raced clear to score to give Leinster a slender 10-8 interval lead.

Leinster opened the second half strongly and New Ross centre Kieran Butler capitalised on an instinctive intercept try to race clear, with Co. Carlow’s Thomas Daly adding the conversion. Butler then snared his second try of the afternoon when he finished a fine backline, with Daly again adding the points, to make it 24-8.

As the game drew to a close out-half Liam Bourke crossed for his side’s fifth try before Navan replacement winger Daire Dalton touched down on the stroke of full time, with Daly converting, to seal an emphatic victory.

*Leinster will win the Under-18 Clubs interprovincial title if they defeat Connacht next Saturday in Donnybrook (KO: 12.30pm)

The first Leinster Under-19 team fell to a 20-13 defeat to Ulster in the second of Saturday’s interprovincials in Donnybrook.

Wing forward Joe O’Brien’s 36th minute try, which was converted by Newbridge College’s Peter Osbourne levelled the scores at 7-7 after Ulster had taken a seven point first half lead.

Further penalties by Osbourne on 45 and 52 minutes made it 13-10 for Leinster before two late Ulster tries against the run of play sealed Leinster’s fate.

Meanwhile, the Leinster Under-19 team in the later kick off sealed an emphatic 45-3 victory, running in five second half tries, over Ulster in Donnybrook.

The scores were level at half-time with Peter Lydon’s 10th minute penalty squared by Ulster’s Richie McMaster 15 minutes later but the floodgates opened in the second half through tries from Alan O’Connor (50), Tyrone Moran (57), Garret O’Suilleabhain (60), Des Merrey (65) and Richard Marsh (67).