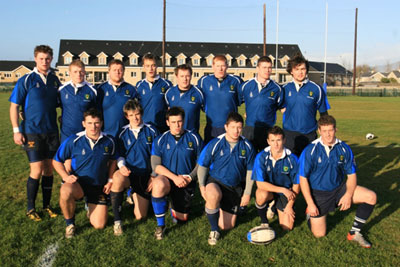 Leinster Colleges are now considered favourites to take their fifth ‘Treasury Holdings’ Colleges interprovincial title in a row after defeating Ulster 50-43 at Dundalk IT on Wednesday….

Leinster started off strongly by scoring two tries in the first fifteen minutes; in the tenth minute by Ben Woods (DCU) followed by a second try by Leslie Wojnar (IT Carlow) in the 15 minute, both converted by Alan McGinity (Sallynoggin) who finished the game with a tally of six conversion kicks and one penalty.

Ulster Colleges responded with their first try in the 20 minute by James Wilkinson (UU Coleraine) converted by Michael Lawton (Belfast Met). Robert Duke (IT Carlow) went over for Leinster in the 22nd minute with further tries for Ulster in the 25th, J Wilkinson (UU Coleraine) and 27th minute S Ferguson (NWRC). Two penalties were awarded close to the end of the first half leaving the score at half time Ulster Colleges 24-22.

Both sides fought courageously in the second half with a try for Ulster M Lawton (Belfast Met) in the first 5 minutes and tries for Leinster in the 15th (R Duke), 17th K Miller (IT Carlow) and the 40th minute H Nolan (DCU). Ulster had tries in the 20th and 30th minute (Scott Browne and Simon Logue) but Nolan’s late try levelled the score at this point at 43-43.

Nolan again scored what was to be the match winning try in the last minute. This try was again converted by McGinity leaving the final score 50-43 in favour of the Leinster Colleges.