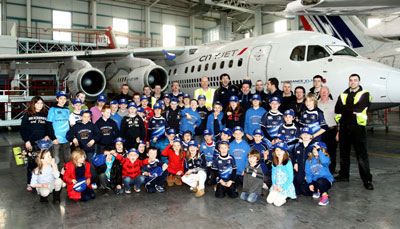 CityJet, proud sponsor and official airline of Leinster Rugby, teamed up together to invite the Leinster ‘Cubs’ to the CityJet Hangar in Dublin…

Over 50 young Leinster ‘Cubs Club’ members were given an exclusive look in to the aviation industry, including exclusive access to visiting the cockpit of an Avro RJ85. The Cub members were between the ages of 7 to 12.

For this special occasion, CityJet divided the aircraft hangar near Dublin airport, into a guided tour by six parts: wing, landing gear, tail, cockpit, cabin with even a spare engine on display for the young enthusiasts to examine.

Accompanying them on the tour were Leinster and Ireland players John Fogarty, Shane Horgan and Rob Kearney who were just as excited to explore the intricacies’ of the aircraft. The tours were led by CityJet engineers, who answered all possible questions asked by the young supporters.