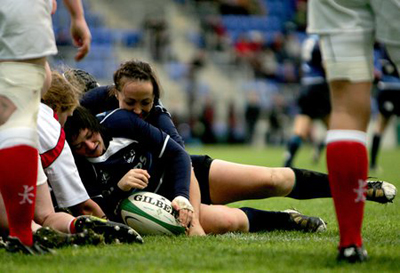 From the off it was clear that the Blues meant business and their Northern opponents had their work cut out from them.

An early try from hooker Yvonne Nolan set the standard that was only to increase as the clock ticked. While Ulster worked slavishly to put points on the board, any attempts to penetrate the Leinster defence were knocked straight back. Ulster were awarded a penalty and took the 3 points, which was indeed to be their only real opportunity to score.

It was a game of quick hands and fierce rucking for the Leinster side who were determined to show case their hard work and talent. The second try of the game came from Leinster winning an opposition lineout which was followed by a couple of well worked phases by the pack and resulted in a well timed pass to Ciara Kennedy who powered over the line.

Consistent strong rucking and tackling kept the Northern side at bay. While Ulster began to gain momentum with a series of pick and go’s, the Leinster team stood strong an refused to bow down. An impressive break from Captain Sinead Ryan coupled with unfaltering support from winger Tammy Breen almost saw a third try for the Blues before half-time. Unlucky Breen was held off by a sturdy Ulster defence and the winger was unlucky not to score in the corner. A series of solid scrums and determined rucking saw Leinster win a penalty at the ruck due to their superior discipline.

The second half saw both sides come out stronger and faster. The Leinster pack was hungry for the ball and trojan work by Emer McEnally, Fiona Coughlan and Yvonne Nolan led to three successive scrums in which their unabating strength began forcing errors from the Ulster side.

An exciting break from Leinster, led by Ryan who linked up with the back line for an intelligent display of quick ball and strong defence served to up the ante for an already dominant side. Strong defensive commitment from Ulster resulted in a line-out within touching distance of the try line. The Leinster pack were spurred on to win the opposition line out and maul over the line to give the Blues their fourth try of the day.

The game progressed with consistent attempts by Ulster to break the Leinster line but to no avail as the Blues stood strong in both attack and defence. Strong scrums were a key feature of the game and the Leinster pack’s hard graft was rewarded with a penalty lineout after twisting the scrum 90 degrees. A combination of impressive rolling mauls and quick ball culminated in a perfectly executed back line move between prominent outhalf Shannon Houston and centre Nora Stapleton which resulted in winger Tammy Breen scoring a much deserved team try.

Ulster, in a desperate attempt to add points to the score board, battled hard and a series of pick and go’s saw them step it up a gear and win a penalty on the 5 metre line. However, their determination was no match for the uncompromising Leinster pack who repeatedly knocked them back and forced yet another error.

Another superior scrum by Leinster gave scrum-half Amy Davis the opportunity to truly impress with a roaring 70 yard break from within the 22 which saw her dance through the Ulster defence and present a perfect off load to oncoming support which culminated in an exciting try under the posts from Nora Stapleton in the final ten minutes.

An easy conversion brought the score to 30-3 and the introduction of a number of fresh players from the bench shut down any hopes Ulster may have had of a last minute score.

The game proved to be an easy win for Dan Van Zyls’s side and hopefully a sign of the exciting rugby we can expect over the coming season.