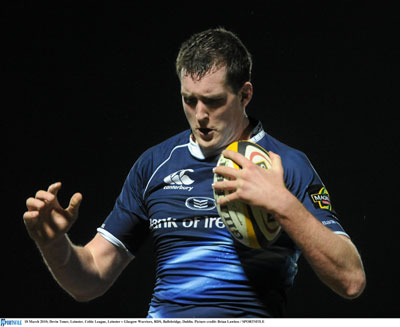 The Ireland 34 man squad for the 2010 Guinness Series shows the return of several players who were absent from the summer tour and 12 Leinster players, including the uncapped Devin Toner…

Ireland will play South Africa, Samoa, New Zealand and Argentina on consecutive weekends in November and the squad sees Keith Earls, Rory Best, Stephen Ferris, Denis Leamy, Sean O’Brien and Donnacha Ryan, who were all ruled out of the summer tour due to injuries at the end of the season, named in the panel.

Leinster’s Devin Toner was also injured for that tour but returns to the squad as one of two uncapped players, the other being Johne Murphy who came into the summer tour party as a late replacement.

Commenting on the upcoming Guinness Series, that will see Ireland play its first international game in the Aviva Stadium, Ireland Coach Declan Kidney said, “It will be great to be back playing in the home of Irish Rugby on Lansdowne Road in the Aviva Stadium and the atmosphere from what I have seen so far rivals the old stadium. There will be a lot of talk about the new stadium and also about the Rugby World Cup, but the responsibility for the squad and management will be firmly to concentrate on the first game and then take each week as it comes in November. We will soak up all the excitement that goes with all that, but the focus for everybody on November 6th will be performing against South Africa.”

There are several players who remain out of consideration due to ongoing rehabilitation with Paul O’Connell and Kevin McLaughlin continuing their recovery from long term injuries, with Tomas O’Leary also ruled out until mid November due to his broken thumb. Jerry Flannery and Luke Fitzgerald picked up injuries over the weekend and are remaining with their provinces to be fully assessed where a decision can be made if they are fit to join the squad and take part in training.

Kidney continued, “It is going to be a demanding month for the squad and the first time we have played four games in the Guinness series. We felt it was important to have at least 30 fit players to choose from in terms of setting the foundations for November and it was better for those who picked up knocks to be assessed back in the provinces and when they have the all clear, to come back into the squad.

“Jerry (Flannery) and Luke (Fitzgerald) are in that position, as are fellas like Tomas (O’Leary) and Leo (Cullen) who may well come back into the mix depending on their recoveries and game time that they may need to build up over the next couple of weeks.

“We need everybody in a position to be able to contribute in training and while we may well leave a window for those coming back, all the players in the squad are deserving of their chance. There are a lot of players who are unlucky not to make this squad, but the door will remain open to them also during November to join up with the panel.”