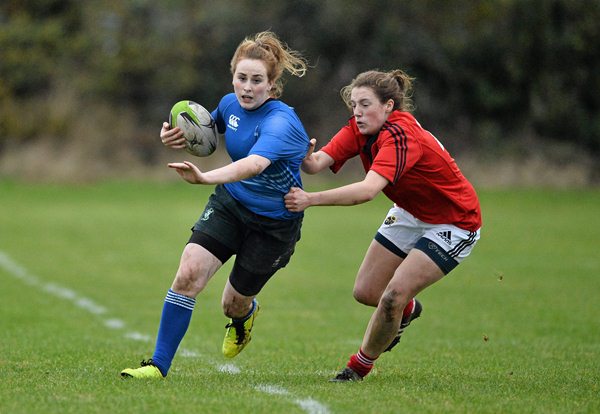 The squad, made up of girls from 12 clubs all over Leinster played Connacht first. The Leinster forwards, led by Captain Rachel Griffey from Wicklow eventually subdued a fine Connacht pack and supplied good quick ball to the backs. Highlight of the game was a stunning length of the field try by Mullingar full back Ellen Taite. The game finished 19.0 to Leinster.

The Leinster girls then took on Munster, who had just beaten a strong Ulster team and looked very confident as they took to the field. After an arm wrestle of a match in which a ferocious Leinster pack barely allowed their southern counterparts to leave their own 22, the pressure on the Munster team eventually took its toll.

They gave away a penalty under the posts and Tullow girl, Maeve Donohoe calmly stepped up to claim the 3 points on offer. Munster threw everything at Leinster for the remainder of the game, but Leinster’s defence was superb and Munster just could not score, so the game finished 3 Nil. The final whistle led to scenes of wild celebration from the large Leinster crowd, and desperate disappointment for the vociferous travelling supporters and their team.

Some of the Irish ladies team came down on the day to support the girls and pose for photos.The Leinster girls will now go to Belfast to play Ulster at Queens University on the 30th of November. Well done girls!

Click here to view exclusive photos from the two matches.