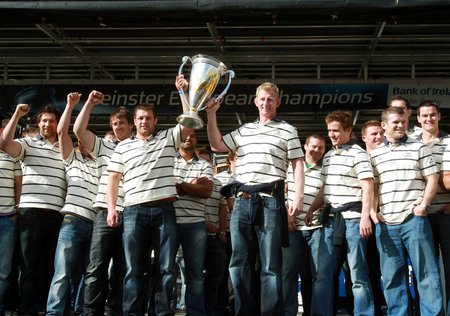 A crowd of over 5,500 supporters gathered in the RDS on Sunday afternoon to welcome home the victorious Leinster squad with the Heineken Cup in tow…

Leinster, who lifted the trophy for the second time in three years on Saturday evening, defeated Northampton in the Millennium Stadium and were warmly received by the supporters, many of whom had travelled over to Cardiff.

A special presentation was made by OLSC President Jarrod Bromley to thank Shaun Berne, Nathan Hines, Stephen Keogh and Stan Wright for their contributions to Leinster’s success on behalf of the supporters club as all four will move on this summer.

RTE’s Michael Corcoran was MC on the day while Leo the Lion was on hand to the delight of the supporters, young and old. The Lord Mayor of Dublin, Gerry Breen, also addressed the supporters as he congratulated the team on their European success.

Thankfully the rain showers cleared in time for the team’s arrival and there was live music, children’s entertainment and extended highlights of Saturday’s famous fightback for the followers to enjoy.

The squad signed autographs and posed for photographs on an afternoon of celebration for the province.