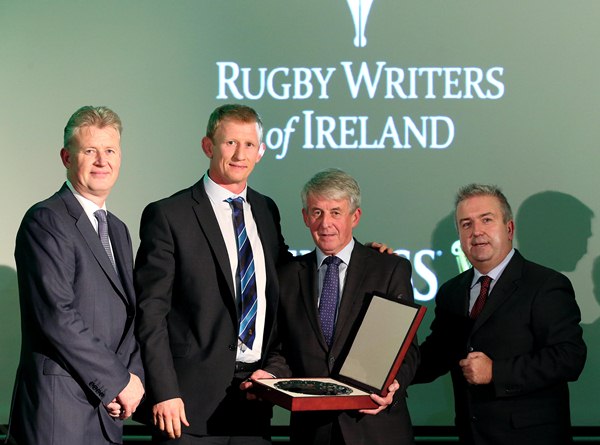 Leinster were awarded the Dave Guiney Team of the Year for the third year running – after claiming three trophies last season, namely the PRO12, Amlin Challenge Cup and the British & Irish Cup – at the GUINNESS Rugby Writers of Ireland Awards in the Guinness Storehouse on Monday night…

Former Leinster out-half Jonathan Sexton was awarded the GUINNESS Rugby Writers of Ireland Player of the Year for 2013.

Niamh Briggs picked up the Women’s Player of the Year after a fantastic season where she played an instrumental role in the Irish Women’s team historic Grand Slam victory in the Six Nations.

The Women’s side, coached by Philip Doyle and captained by Fiona Coghlan, were also honoured for their heroics with a Special Recognition award.

Lansdowne FC were voted Club of the Year due to their success in the Ulster Bank League this past season, as they sauntered to the top flight title by a margin of 18 points.

The Tom Rooney award went to Alain Rolland for his exceptional contribution to refereeing, which has seen him representing Ireland at the highest level on the world stage. He is retiring at the end of the season.

Former Ireland and British & Irish Lions player and manager Donal Lenihan was inducted into the GUINNESS Hall of Fame.

Monday night’s awards ceremony was hosted by Peter O’Brien of GUINNESS and John D O’Brien, Honorary Secretary of the Rugby Writers of Ireland.

PLAYER OF THE YEAR – JONATHAN SEXTON
Jonathan Sexton announced himself to European rugby when he replaced the injured Felipe Contepomi in the first half of Leinster’s famous semi-final victory over Munster in 2009. He then went on to win three Heineken Cup Cup medals with the province.
Last season, Sexton helped Leinster to their first ever Amlin Challenge Cup as well as the RaboDirect PRO12 title. On the back of these performances, he was selected for the British & Irish Lions tour to Australia this summer.
He made seven appearances in Australia and played a strong hand in the Lions’ first tour win since South Africa in 1997. He started all three Tests against the Wallabies and played an influential role in the penultimate Test, creating several tries and scoring one himself. This season Sexton is playing with Racing Metro 92 and is a key member of their squad.

WOMEN’S PLAYER OF THE YEAR – NIAMH BRIGGS
Niamh Briggs started playing club rugby with Dungarvan RFC, before making the move to senior rugby with Clonmel and she now plays for UL Bohemians. First capped for Munster in 2006, she went on to play a key role in Munster’s winning Interpro sides that claimed the title in 2007, 2008, 2009, 2010 and 2012.
For Ireland, Niamh has been capped over 30 times. She played a vital role in Ireland’s 2013 Six Nations Grand Slam winning side, scoring three tries and kicking 28 points as she helped her side to an historic success.

CLUB OF THE YEAR – LANSDOWNE FC
Lansdowne FC was founded in 1872 by Henry WD Dunlop. Steeped in the history of the game, the club is one of the oldest rugby clubs in Ireland as well as the one of the best known wherever the game is played.
In 2012/13, Lansdowne, under the guidance of Welsh Grand Slam-winning head coach Mike Ruddock, took the Ulster Bank League by storm. Playing an attacking brand of rugby that opposing sides struggled to cope with, Lansdowne romped to victory, winning the league by a margin of 18 points.

DAVE GUINEY PERPETUAL TROPHY (TEAM OF THE YEAR) – LEINSTER
Leinster continued on their winning ways in the 2012/13 season, as they claimed not one, but three trophies. Having missed out on qualification for the Heineken Cup, they stormed to success in the Amlin Challenge Cup, beating Stade Francis 34-13 at the RDS.
The following week they went on to beat provincial rivals Ulster 24-18 in the RaboDirect PRO12 final and claimed the trophy that had eluded them for so long. Alongside these two victories, Leinster ‘A’ also lifted the British & Irish Cup, making it another great season for the province.

TOM ROONEY AWARD – ALAIN ROLLAND
Alain Rolland is considered one of the top referees in world rugby. In his playing days, Rolland played at scrum half for Leinster and also gained three caps for Ireland. After retiring from playing, he began his refereeing career, with his first Test appointment coming in 2001.
The experienced official has enjoyed an excellent career at the forefront of world rugby and has been involved in three World Cups, peaking in 2007 where he officiated the final between England and South Africa.
He was also an assistant referee in the 2011 final. Rolland has recently announced his intention to retire from refereeing at end of the current season.

GUINNESS HALL OF GAME – DONAL LENIHAN
Donal Lenihan made his international debut for Ireland in 1981 against Australia at the age of 22. Donal played for his county an impressive 52 times including as captain on 17 occasions. He was selected for three Lions tours (1983, 1986 and 1989) and was the popular captain of the unbeaten 1989 mid-week side that became known as ‘Donal’s Donuts’.
After retirement from rugby, he took over as manager of Ireland in 1998. He later resigned as manager at the end of the 2000 season to take over management of the British & Irish Lions for their 2001 tour to Australia. Donal is still very much involved in the game, and can be heard co-commentating on radio and TV.