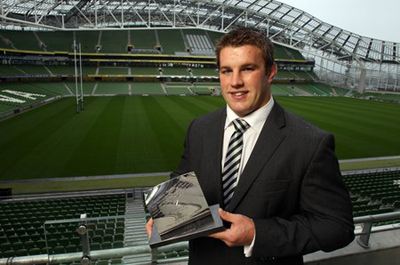 Sean O’Brien (Leinster and Ireland) has been named GUINNESS – Rugby Writers of Ireland PLAYER OF THE YEAR and received his award at a function in the Aviva Stadium, Dublin on Monday evening…

Lynne Cantwell was named women’s player of the year after an outstanding season.

All Ireland League Champions, Old Belvedere RFC, were voted CLUB OF THE YEAR and Leinster picked up the Dave Guiney perpetual award as TEAM OF THE YEAR in recognition of their Heineken Cup Success.

The TOM ROONEY AWARD, for making an exceptional contribution to the game, went to Alan Lewis, whose refereeing record includes two World Cups and a record number of European Cup matches.

The two new members inducted to the GUINNESS HALL OF FAME were out half Ollie Campbell and winger Mick Lane.

Peter O’Brien of GUINNESS and Brendan Fanning, Chairman of the Rugby Writers of Ireland, jointly presented the awards.

SEAN O’BRIEN – PLAYER OF THE YEAR

In the 2010/11 season Sean O’Brien started all of Leinster’s nine Heineken Cup matches scoring 4 tries and picking up 3 man of the match awards along the way to overall success in Cardiff in May.

O’Brien also started all of the 2011 Six Nations matches, this time picking up the man of the match award against Italy.

He earned his first cap for Ireland against Fiji in the RDS in 2009 with a second cap coming soon after against South Africa.

Old Belvedere was founded in 1930, and has made a huge contribution to Irish Rugby since. Several world class internationals and a large number of administrators and referees have been spawned by the Anglesea Club.

Before this year their proudest boast was winning seven Leinster Cups in a row in the forties, but this year’s achievement was up there with that amazing and unequalled run of victories. Having been demoted to the second division, they not only won their way back but went through this year’s All Ireland League to win the whole thing with an impressive victory over Cork Constitution in the final.

LEINSTER – DAVE GUINEY PERPETUAL TROPHY (for team of the year)

Leinster completed an extraordinary comeback when they stormed back from a 16-point halftime deficit against Northampton to win 33-22 and lift the Heineken Cup for the second time in three years.

Leinster reached the Magners League Grand Final in Thomond Park against league toppers Munster, after finishing 2nd in the league format & beating Ulster in the Semi-Finals, however Leinster were beaten by Munster 19-9.

Alan Lewis has announced his intention to retire from refereeing at the end of this season. With 45 major international Test matches to his credit, including a Rugby World Cup quarter-final and games across the RBS 6 Nations Championship and Tri Nations, Lewis is one of the longest serving IRFU international referees.

Alan Lewis also holds the record for matches in European competition with an incredible 83 matches, 71 of which were Heineken Cup games including three semi-finals and the Heineken Cup final in 2007.

Mick Lane was a member of the great Irish side of the late forties and early fifties, missing out on the 1948 Grand Slam through injury but he was on the side that took the Triple Crown in 1949, and the side that narrowly missed another Grand Slam in 1951.

Ollie Campbell was first capped in 1976 and had to wait until 1979 to be capped again, this time controversially against Australia in Australia where he was preferred to the incumbent, Tony Ward. Campbell more than justified his selection by kicking Ireland to a series win.

Ollie then became a fixture on the Irish side although the selectors tried to accommodate both himself and Tony Ward, but it was Campbell who wore the number ten shirt as he played a major part in the acquisition of Ireland’s first Triple Crown since 1949 in the 1982 season, and he had a hand in most of the significant and memorable moments of that campaign, including scoring all of Ireland’s points against Scotland.

A staunch member of Old Belvedere RFC he was captain of that club from 1979 to 1981.

He won 22 caps for Ireland and another six for the Lions, and was a huge contributor to the fabric of the Irish Rugby even after he had retired from playing.

Lynne Cantwell only took up Rugby late in life when she went to University of Limerick to study sports science. Since taking up the game her influence on the Irish women’s rugby scene has been remarkable and so far she has been the most influential personality Ireland has had since the start of women’s rugby transforming the national side into a highly competitive unit and becoming Ireland’s most capped player.

She lives in London now, where she is active with the Wooden Spoon Charity 7s, who travel all over the UK and has beaten the Women’s national side three times this year.