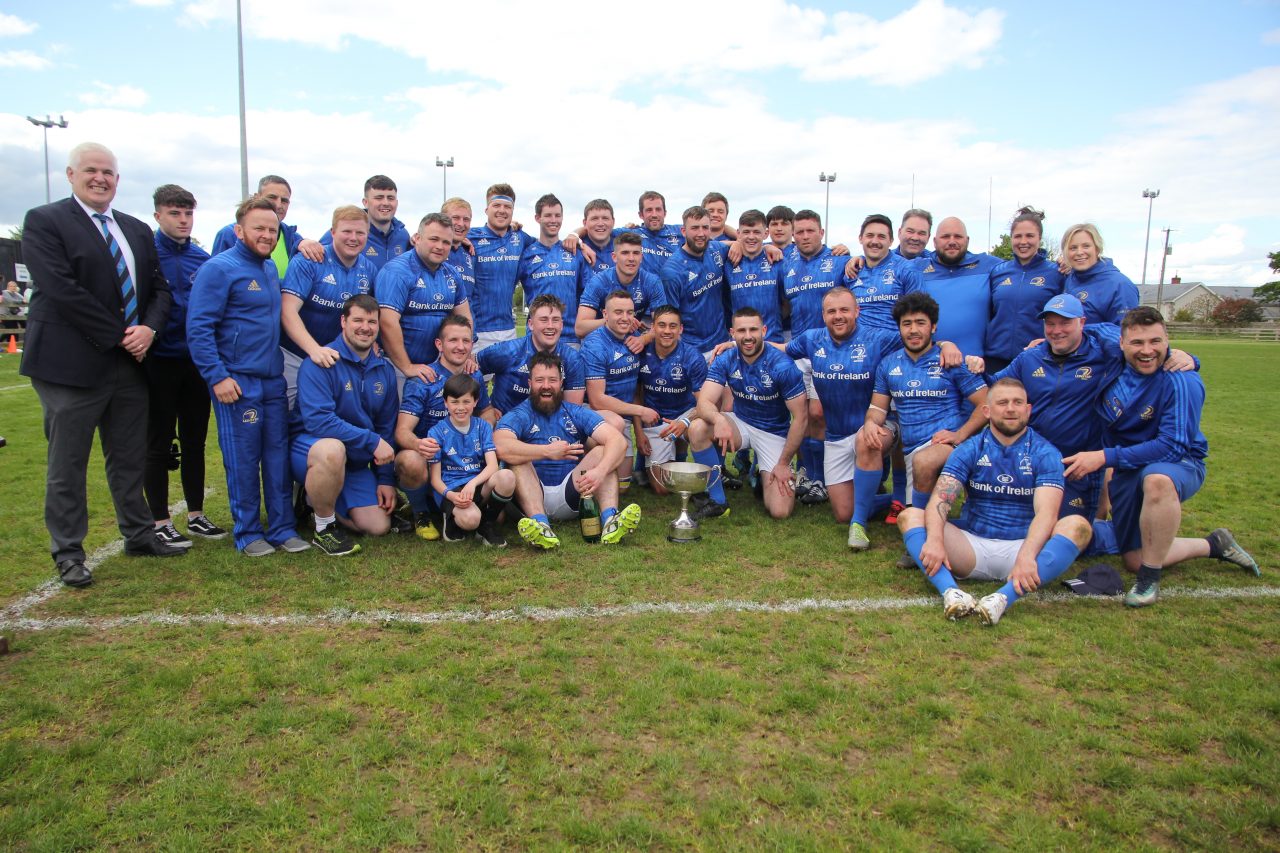 The Leinster Rugby Junior team retained their Interprovincial Series title with a 28-20 win over Ulster on Saturday in Dundalk.

Both Leinster and Ulster were in the hunt for the title, with Ulster sitting on top of the Interprovincial table, one point ahead of their hosts.

Connacht and Munster were waiting in the wings if either side slipped up as it was possible that any one of the four provinces could win the title going into the last round of games.

“Junior rugby is phenomenal. It’s the backbone of rugby. It’s small towns, local clubs and local players. It’s just brilliant and to get rewarded wearing a @leinsterrugby jersey is even better.”https://t.co/O04Hdsm7LE pic.twitter.com/L1FW0Y80jb

Leinster were put under early pressure by the visitors. The home side worked hard to repulse an early onslaught by Ulster which included conceding a penalty to the men in white within the first minute.

Ulster kept the early pressure up and their hard work resulted in a kickable penalty after five minutes. The kick at goal was good and Ulster had the early lead, 0-3. 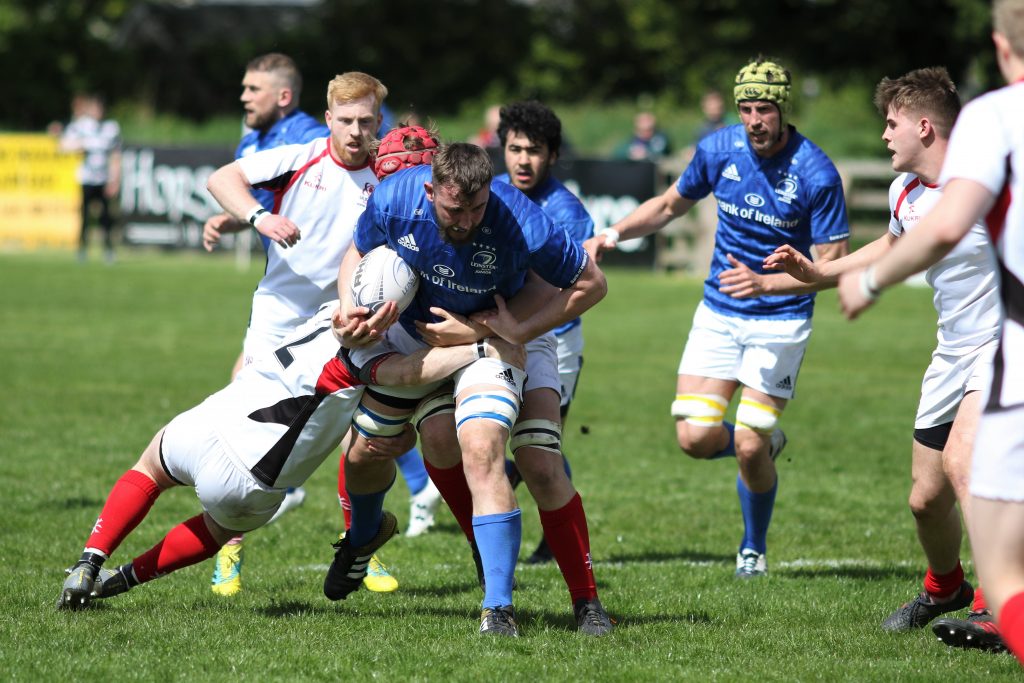 Leinster struck back quickly however with a try after 8 minutes. Mikey Russell made a scything break through from the Ulster 10 metre line up the left hand side.

Drawing the despairing defenders with him, he placed a perfectly weighted pass inside to his right to the awaiting hands of Leinster full back, Matt Stapleton. The try was converted by Jake McDonald. Leinster now had the lead.

The game was being played at a frenetic pace. Unfortunately, the first casualty of the afternoon was local man and stand out prop, Johnny Gray. He suffered a recurrence of a leg injury in the 16th minute and could play no further part in the action.

Meanwhile, Ulster continued to test the Leinster defence and their endeavors were rewarded with their first try of the afternoon in the 23rd minute. The try, to the left of the posts, was scored by Matthew Coulter after a burst by Michael Kirk. The try was not converted however, leaving Ulster with a narrow one point lead. 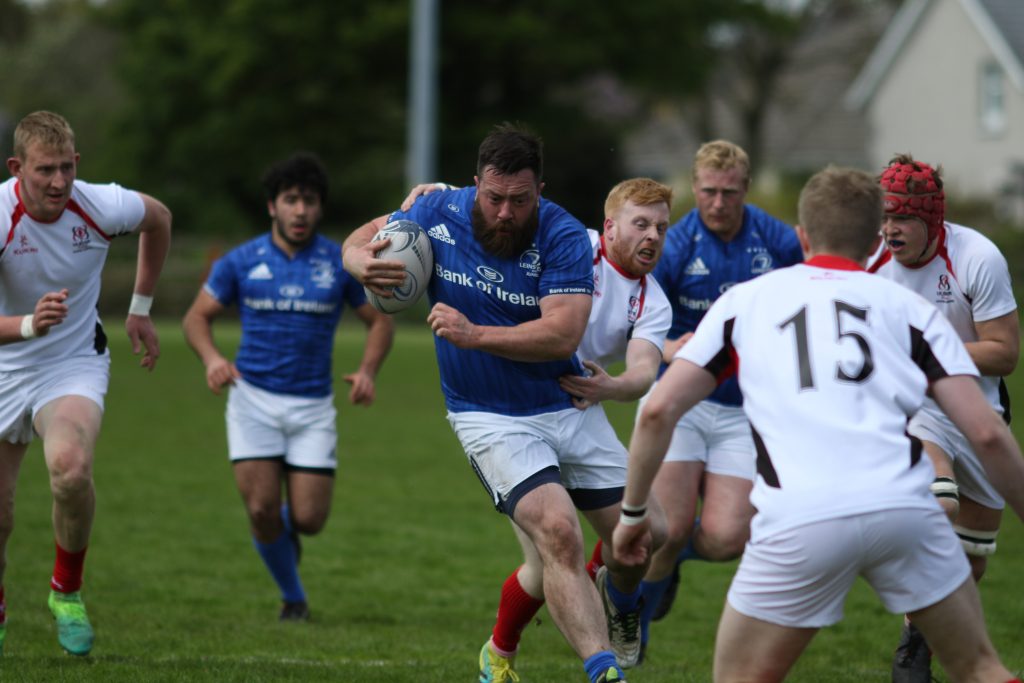 Leinster immediately fought back. A great burst up the middle was brought to a halt just inside the Ulster 22. Leinster were penalised for not rolling away but they soon recovered possession of the ball through their imperious line-out and attacked again.

This sortie by Leinster came up just short of the Ulster try line and Ulster were again able to relieve the pressure with a kick that made touch. Leinster won the resultant line-out and set up a maul that drove forward 10 metres before the ball was released and moved out to the left.

The Leinster hands were quick and accurate resulting in a try for replacement Hugh Gowing in the 32nd minute. This try was converted again by McDonald giving the home side a 14-8 advantage.

However, this game was being played at an incredible tempo and Ulster were quick to strike back with a try through Johnny Hyndam. Again this try was unconverted and Leinster remained in front. 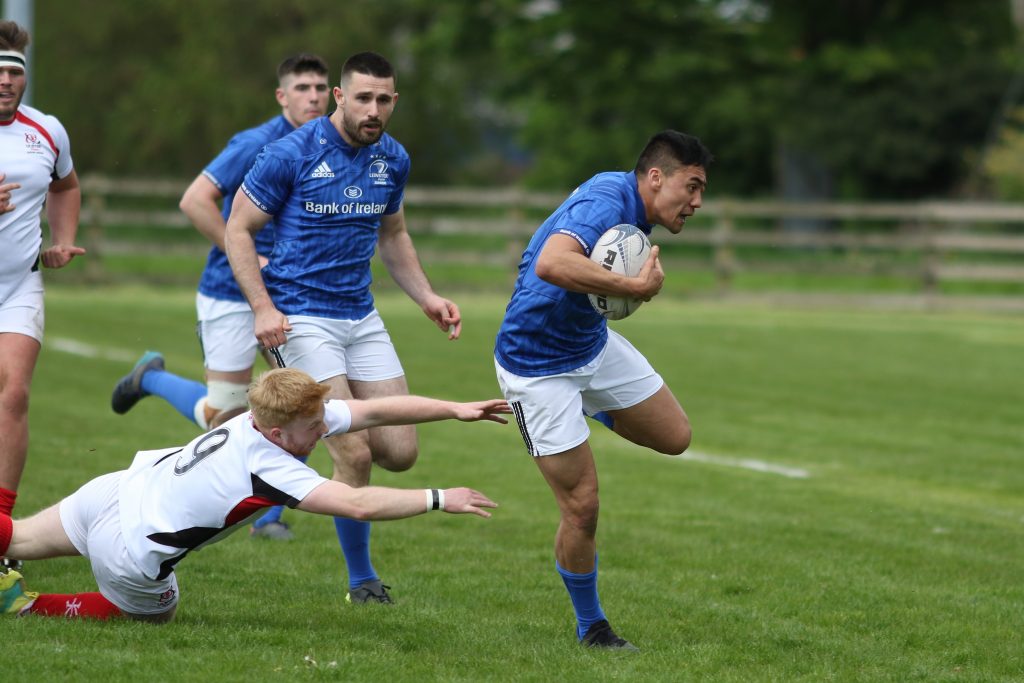 The scoring in this frenetic first half had not yet finished. Leinster regained possession after the restart from the Ulster try and then went through a series of drives through both their forwards and backs.

They quickly made their way towards the Ulster line with repeated use of the ‘pick and go’. Scrum half Alejandro Laforga took an opportunity and burrowed his way through a forest of defending Ulstermen to score Leinster’s third try of the afternoon.

The try was converted giving Leinster a lead of 21-13 at half time.

Ulster came out fired up in the second half determined to find a way back into the match. They dominated the early exchanges in the second half and only an incredible try saving tackle in the 51st minute by Corey Carty followed up by a quick jackal and turn over by Robin Foot saved Leinster from conceding a certain try.

Ulster were finally rewarded for their pressure in the third quarter. A flowing move by their backline up the right appeared to have been halted by a despairing Leinster tackle. The Leinster defender ripped the ball free from the Ulsterman, but the loose ball was pounced on over the Leinster line by Joel McBride. This try was converted by Lee Steenson and suddenly there was just a point in it.

The Leinster men did not panic however and it was from this point that they reclaimed the initiative and took control of the match.

Some clever play, including a deft kick over the defending Ulster midfield, gained Leinster a toehold inside the Ulster 22. This passage of play culminated in a line-out to Leinster which was secured.

The ball was passed out to the right by the Leinster backline and the move saw Leinster’s Padraig Mahon score the all important fourth try which was also converted by McDonald.

Leinster did not relinquish their lead and were able to see out the match to win with a bonus point, 28-20.  Leinster were led to victory by their captain Kieran O’Gorman who had an outstanding game.

Congratulations to the players and to their coaches and all involved in the Leinster Junior team. 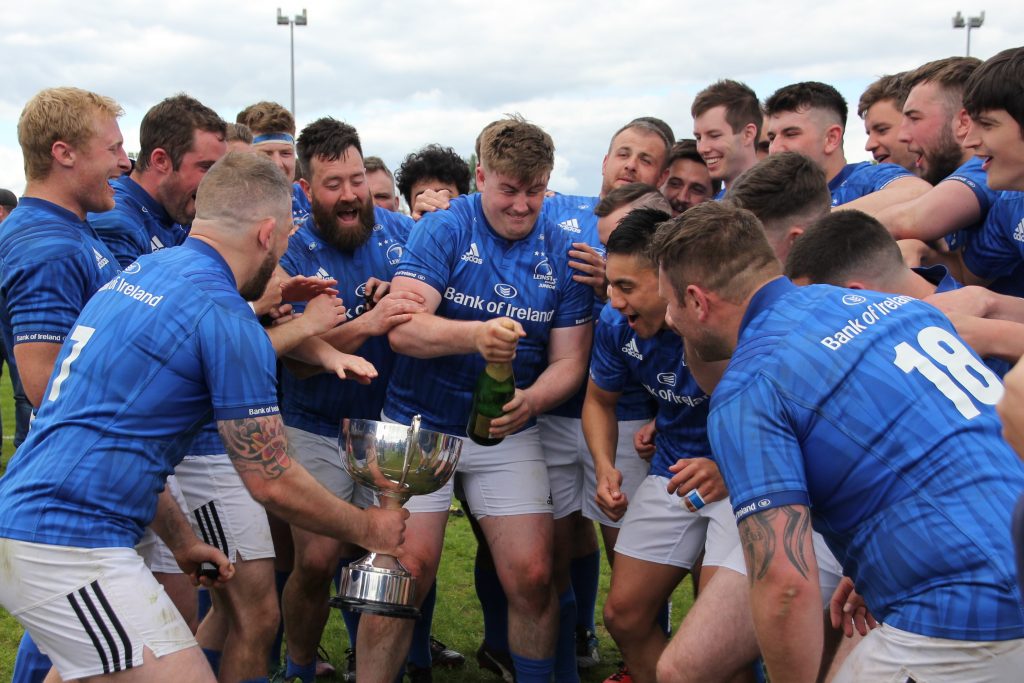