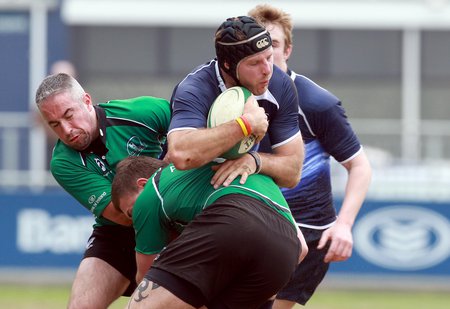 With Connacht having some near misses in recent years there is a feeling that this could be their year to win a first outright championship. Only Munster, who will be playing to avoid a white wash after losing to Ulster 26-24, stand in their way next weekend.

The men from West of the Shannon dominated the first half with two tries from Monivea’s Rory O’ Connor, Paddy Pearson adding a conversion and penalty. However one of the key moments of the match was the fantastic cover tackle made by Aaron Spring.

The giant winger made up at least seven yards on Richie Dunne after he intercepted a pass deep in Leinster territory. Leinster struggled to impose themselves with the strong Connacht eight dominating the tight exchanges particularily at scrum time.

The second half started much brighter for the boys in Blue with the home team finally managing to put some tempo on the game resulting in Dave Murphy scoring a well worked try and Bryan Croke adding the extras.

With Leinster finally managing to get to grips with the Connacht forward pack the home side pressed for another score to close the gap. But it wasn’t to be with Dave Hansbury scoring a try to put Connacht out of sight.

Leinster did score a consolation try under the posts through Ben Swindlehurst and Ivan Poole added the conversion, in what could yet prove to be a very important losing bonus point.

*Next Saturday Leinster play Ulster in Coolmine RFC at 2.30pm in their final Interprovincial needing a win and Munster to them a favour.