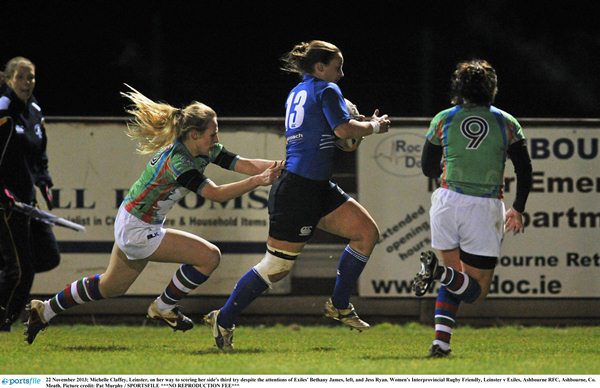 With a final score of 19 points to nil on the scoreboard, Leinster took the spoils in an entertaining, high tempo encounter with the Exiles at Ashbourne RFC on Friday night…

Both teams nailed their colours to the mast early in the game displayed urgency and a willingness to play ball handling rugby, which warmed the spirits of the crowd on the desperately cold evening. Building on a bright start, the Exiles held the ball through multiple phases in the early exchanges while Leinster looked organised in defence and the teams played cat and mouse in the middle of the park, feeling each other out.

As the early part of the half progressed, Leinster took some advantage at set piece time, began to earn a little more ball and hold on to it to apply some pressure of their own. On the fifteen minute mark, from a scrum close in, Leinster’s Sophie Spence managed to forge the first try of the game and Nora Stapleton converted it for a seven nil lead.

True to early form, the Exiles came right back and held some ball of their own further into Leinster territory without creating too many clear cut try scoring opportunities. Ultimately, however, the Leinster defence cracked, and conceding a penalty inside their own 10m, the Exiles chose to shoot for goal. The kick didn’t net the desired result for the visitors but served to spur Leinster back into action and with some increased temp on the ball allied to holding some prolonged territory in the Exiles 22m, the girls in blue crossed for their second of the game wide on the right, scored by Ailis Egan, only this time failing to add the extra points.

Into the second half both teams continued in their efforts to play a high skill attractive game and for the most part succeeded which will have pleased Irish coach Philip Doyle, who was in attendance. As with the first half, it was Leinster again who managed to find an extra gear at crucial times and following a good forward lead drive, moved the ball left to the Michelle Claffey, who ran the ball in from 25m out.

Leinster will have been pleased with the handling efforts of the team in the lead up, with forward and backs once again linking well to create opportunity. A nice conversion from wide on the left by Nora Stapleton, brought the score to 19-0. Both teams played brightly to the final whistle in a game that will have benefitted both squads ahead of upcoming games.

Leinster go in to next week’s encounter with Ulster at Ravenhill with two wins under the belt, but will look to raise their game as the Interprovincial series begins in earnest. Check out all the exclusive photos from the match here.

The Leinster Team that played the Exiles: