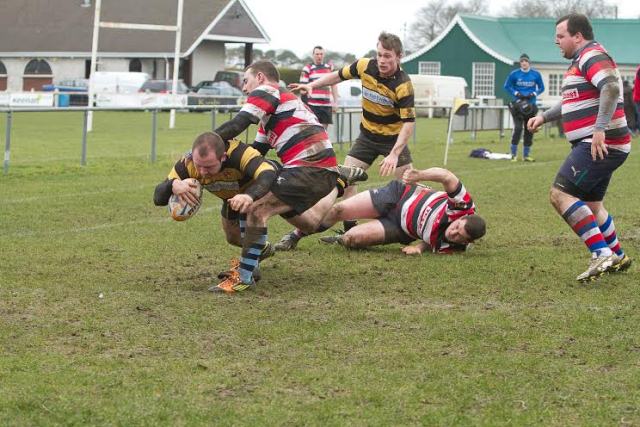 After making a good start Carlow allowed North Kildare back into the game and at one stage the Kilcock side looked like stealing victory. With the main pitch at Oakpark out of commission because of a mystery spring, the game was again played on the top pitch.

Backed by a strong breeze Carlow were immediately pressurising the North Kildare line. Ritchie Whyte missed a penalty on five minutes but on 10 minutes number 6 James Nolan barged through beside the posts following a strong Carlow scrum. Whyte converted to give the home side a 7 nil lead. This lead was doubled on 20 minutes with Barra Farrell getting the touchdown at the back of another driving Carlow scrum.

Then North Kildare suddenly took the initiative and it was their turn to threaten the opponent’s line. Two minutes from half time James Nolan was yellow carded. Kildare ran a number of penalties and in the last move of the first half scored under the Carlow posts to leave Carlow facing the wind in the second half with a shaky 14 – 7 lead.

Just one minute after the restart this lead was down to 4 pts when North Kildare kicked a penalty. Another visitor’s penalty on 10 minutes brought the lead to a single point at 14 -13 and Carlow looked vulnerable. However the Black and Ambers started to run at the opposition and with superb handling and offloading skill crossed for three more tries in the final quarter of the match.

The first try was scored by Dave McDermott in the right corner following excellent work by sub Chris Byrne who had come on at loosehead prop. The next was scored in the left corner by John Michael Nolan after some lovely passing between forwards and back.

Finally outhalf Ritchie Whyte sold a lovely dummy 25 metres out and ran in unopposed under the Kildare posts. The conversion brought the score to 31 points.

Coach Padraig Brennan praised his team for digging deep when the challenge was great. “Although most of this team are very young they are full of spirit and character” he added.

Carlow are now on 45 league points chasing Gorey on 48. Next week Carlow have a tough away consignment in Roscrea whilst Gorey host bottom of the table Clane. Carlow can technically win the league if they could get a bonus point away win against Roscrea and then beat Gorey in a winner takes all showdown at home. However the odds probably are still favouring Gorey.

Carlows Junior 2 side did the double at Oakpark on Sunday against North Kildare with a 44-15 and they too are chasing Gorey to win their section of the Leinster League. After playing with the wind Carlow led 29 nil at half time. This was made up of tries by Joe Gorman (2), Dale MeGee, and Keith Sothern, plus three conversions and a penalty by Eoin Bailey. In the second period Carlow added two more tries, one by Jack Phelan and Joe Gorman got a third to bring his total to five in the last two games.