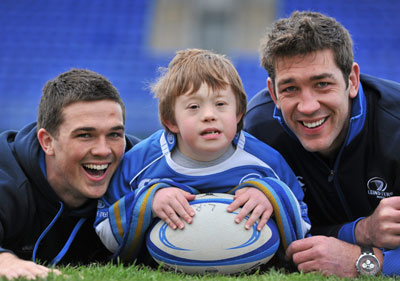 St Michael’s House, one of Ireland’s largest providers of community-based services for children and adults with an intellectual disability, has teamed-up with Leinster to further the development of tag rugby for those with a disability in Ireland…

St. Michael’s House service users and Leinster Rugby players Eoin O’Malley, who also plays on the Ireland ‘A’ team, and Nathan Hines, who also plays for the Scotland and Lions team, turned out to celebrate the launch of the partnership at Leinster’s Donnybrook Stadium recently.

Barbara Wiseman, Head of Fundraising, St Michael’s House, commented: “We are delighted to launch this initiative with Leinster Rugby, and we are extremely grateful to the players for helping our service users to train for the summer blitz. Tag rugby is a fantastic way of encouraging the service users to boost their physical activity, and it promotes a great sense of fun, teamwork and inclusion. We are also looking forward to the St Michael’s House tag team playing a half time match at the sold out Leinster versus Ulster match on April 16th in the RDS!”

While St Michael’s House are one of Leinster Rugby’s chosen charity partners for 2011, the Tag rugby support will be ongoing.

Leinster and Scotland lock Nathan Hines added: “I am pleased to support this important initiative and I hope that this will lead to greater participation in the game. St. Michael’s House do a lot of good work in supporting people with intellectual disabilities and hopefully this is the start of an exciting new era.”