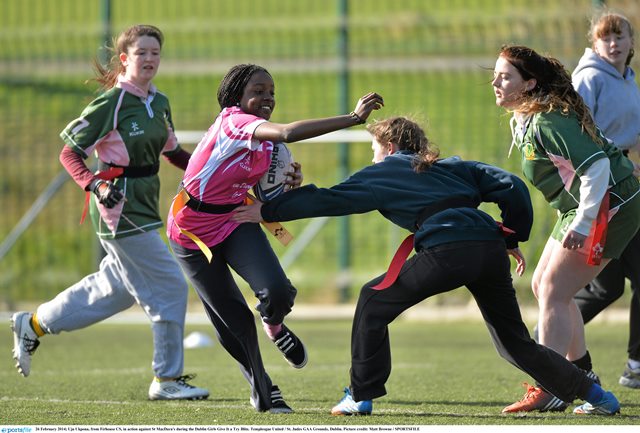 Leinster Rugby launched a new and exciting initiative for girls aged 12-18 throughout the province. The ‘School girls Rugby Competition’ is the first competition that Leinster Rugby has run for school girls in such large numbers…

The success of the Irish Women’s Team and the Leinster Women’s Team has inspired a tremendous interest in female rugby, with many schools enquiring as to how girls can get into playing the game.

The objective of this competition was to introduce girls aged 12-18 to the game of rugby, through the form of Leprechaun Rugby. ‘Lep’ Rugby is a non-contact game, specifically designed to be flexible enough to encourage participation for all. The Leinster school girls competition regulations allows girls of mixed ages to play 10-a-side ‘Tag’ rugby, on a reduced size pitch, in several short games on one day.

For this inaugural year the competition was run with seven Area Blitzes taking place across Dublin, the North Midlands, Midlands and the South East Areas during February and March. Over 30 Secondary Schools have participated in the Area Blitzes, with the winners from each area qualifying to play in the Finals Day on March 27th in Donnybrook Stadium.

The competition has been a fantastic success so far. Many girls who have been introduced to the sport only weeks previously have represented their schools and participated in the competition with each area blitz revealing some talented young players.

The ten finalists are Kildare, Athy, Wicklow, Wexford, Enniscorthy, Dublin, Ardee, Mullingar and Tullamore.
The finals are a free event, running in the Donnybrook Stadium from 11am-2.30pm on Thursday 27th March so please feel free to come along, or contact Womens Development Officer, Jennie Bagnall for more information on the competition at Jennie.bagnall@leinsterrugby.ie.