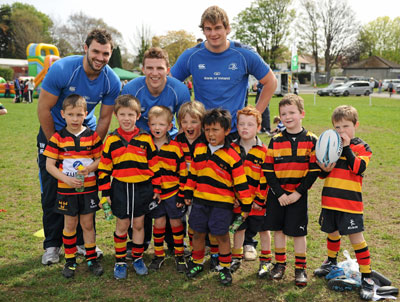 In all 19 clubs played at the event with a total of 1,730 children participating over the two days.

Since the introduction of non competitive matches for all Mini’s Blitzes in Ireland two years ago, the club has seen a marked increase in the numbers playing in the Blitzes and also the number of supporters attending the event.

The Old Belvedere Blitz is managed from start to finish by Jacqui Holmes, OBRFC Mini Coordinator “for more years than we care to remember” and it is through her professionalism and dedication that a successful day is had by all.

The appearance of the three players on the day that Leinster played Leicester Tigers in the Heineken Cup quarter final drew gasps of excitement and cheers from all the players – and from quite a few Mums!

The club looks forward to hosting the event next year and welcoming all visitors back to Anglesea Road. They would like to wish Leinster the best of luck against Toulouse in the Heineken Cup semi final.