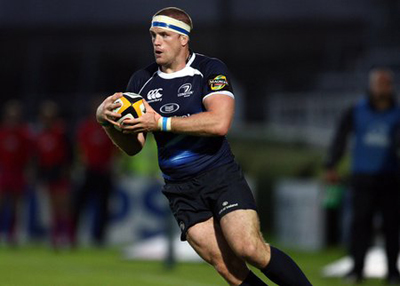 Visser overtook Jamie Robinson and Kevin Morgan as the league’s record try scorer in a season with his 13th touchdown in Edinburgh’s Round 19 home win over Aironi and went on to extend his lead as the top try scorer for the campaign with a 14th in the win over the Dragons.

He is the only Edinburgh player included in the side, which comprises representatives from a record nine of the 12 teams in the newly expanded league.

The 23-year-old Dutch-born, but soon to be Scottish qualified, Visser led the way in 2009/10 with 10 tries and with one game left to play in the regular season he had made it 24 tries in 37 games over the two seasons.

Not surprisingly the ‘Flying Dutchman’ gathered more votes than any other player selected for the fifth Magners League Dream Team, chosen by a panel of 19 journalists from the four participating nations. He received 17 votes, while his wing partner Fionn Carr, the first Connacht player to join the Magners League elite, polled six.

Leinster lead the way for the third time in five years with five players and there are eight players from the four Irish provinces, with one each from table-topping Munster (Ronan O’Gara), Play-Off chasing Ulster (Ruan Pienaar) and Connacht (Fionn Carr).

Heaslip, Man of the Match in Leinster’s Heineken Cup semi-final win over Toulouse last weekend, made it five years in a row with his inclusion in the 2010/11 Dream Team – the only ever-present.

The Lions No 8 has been at the centre of one of the outstanding back rows in the to competition, helping Leinster reach the Magners League Play-Off semi-finals and the Heineken Cup final. He pipped Munster rival James Coughlan and Scarlets newcomer Ben Morgan to the No 8 slot, although clubmate Sean O’Brien was also in the mix.

The remarkably versatile O’Brien received votes in all three back row positions and polled twice as many votes overall as any of the other 20 players nominated for the three positions. In the end, O’Brien led the way for the blindside flanker’s role, with Cardiff Blues rising star Sam Warburton taking the No 7 openside shirt.

Glasgow Warrior’s highly rated Scottish international lock Richie Gray topped the way voting among the locks and has the Ospreys’ skipper Alun Wyn Jones a packing down alongside him in a second row that has a Lions look for 2013.

Leinster’s rising front row reputation is reflected in the selection of Irish tight head Mike Ross ahead of the choice for the past two seasons, Wales and Lions ace Adam Jones, at No 3 and Richardt Strauss at hooker.

The loose head spot goes to one of the most consistent performers over the history of the Magners League, the Scarlets’ former Wales prop Iestyn Thomas. He heads a list that featured Wales prop Paul James as his nearest rival as he returned to the Dream Team for the first time since its inception in 2006/07.

Behind the scrum there are three more stand out selections alongside that of Visser. Leinster full back Nacewa picked up 16 votes, with three other candidates polling only one each.

Scarlets’ Welsh centre Jonathan Davies picked up 14 votes for one of the two centre berths with his nearest rivals getting only five. Brian O’Driscoll, a Dream Team member for the two previous campaigns, was one of those two, but he was beaten on a second draw to the No 13 jersey by the Blues’ Casey Laulala.

At scrum half, Ulster’s regular match winner Ruan Pienaar was a runaway winner with 13 votes – 10 more than the man he replaced, Leinster’s Isaac Boss – while his half-back partner is Munster’s points machine Ronan O’Gara, who returns to the Dream Team after a season’s absence.

OUTSIDE HALF – RONAN O’GARA (MUNSTER)