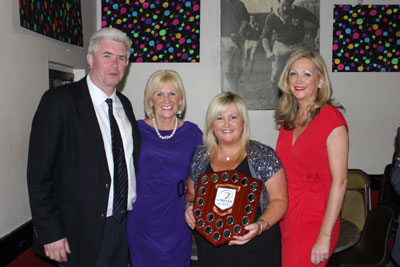 All those in attendance enjoyed the guest speakers in particular our main guest speaker Ken Ging (Greystones RFC).

The recipients of the awards for the season were as follows: Des Flanagan (Portlaoise/Railway Union) was given the Ham Lambert Lifetime Achievement Award for his services to refereeing in Leinster over more than 50 years.

David Bolger (Gorey RFC) was presented with the Harry Ardill Referee of the Year Award and the final award for Club of the Year, which this year was dedicated to the memory of Terry Doyle (Terenure College RFC), went to Edenderry RFC. Present on the night to present the award was Deirdre Doyle and her two daughters Andrea and Suzanne.