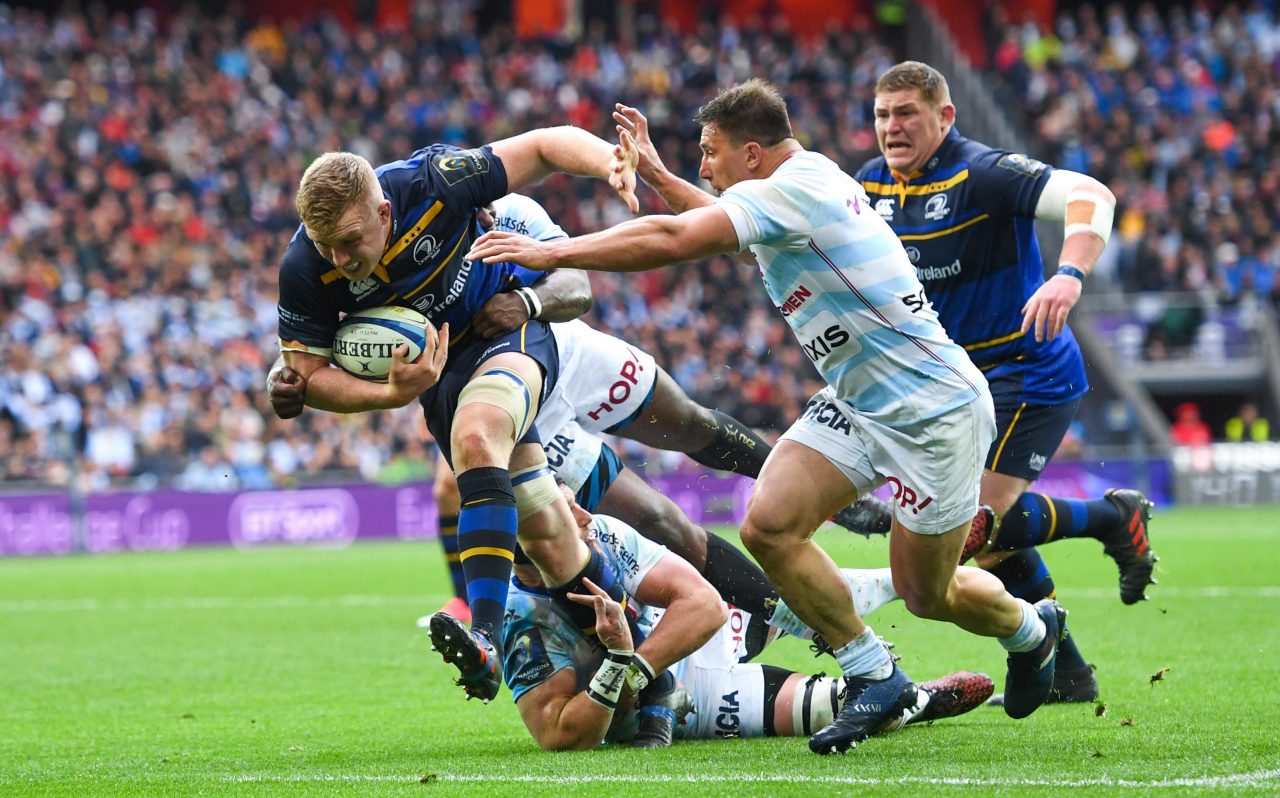 Since becoming the Leinster Rugby club photographer at the start of the 2017/18 season, Sportsfile’s Ramsey Cardy has had a front-row seat at the province’s games.

From the RDS Arena to the San Mamés stadium, Cardy has been there to capture cup finals, big wins, and heart-breaking losses.

Here, he takes us through the 2018 Champions Cup Final in Bilbao, and how he and his colleagues at Sportsfile prepare for and cover these big games.

For the Champions Cup Final in Bilbao, I flew with the team on their charter flight two days before the match. I would do some arrival pictures for the newspaper previews and settle in.

The next day is the captain’s run in the stadium that morning and later that evening you have the Challenge Cup Final in the same stadium, which you would treat as a run-through or a rehearsal for the Saturday. 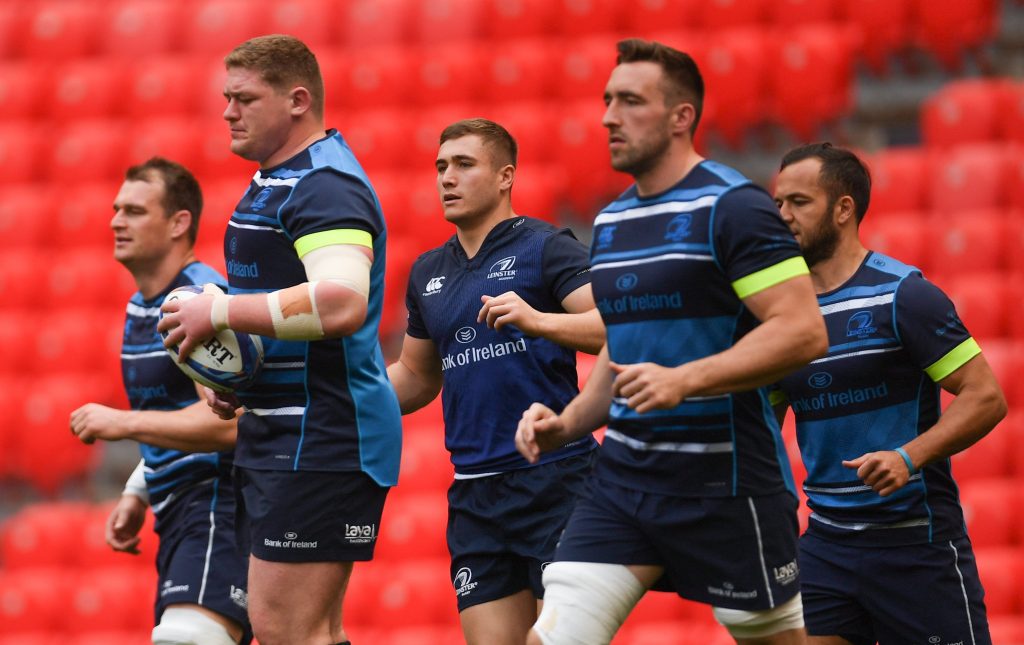 You’d look at things like what the photographers’ positions are, where the teams run out, what the internet and media facilities are like, how the cup presentation is done, that sort of thing – a long day but important prep.

So then on the morning of the match, I sit down with the other Sportsfile photographers covering the game.

Brendan Moran and Stephen McCarthy were with me in Bilbao. Stephen was the Leinster Rugby club photographer from 2013-2017, and Brendan has been covering Leinster games since 1995.

We go through our plans and bring in a bit of detail from the night before so everybody would have their own position and a plan. 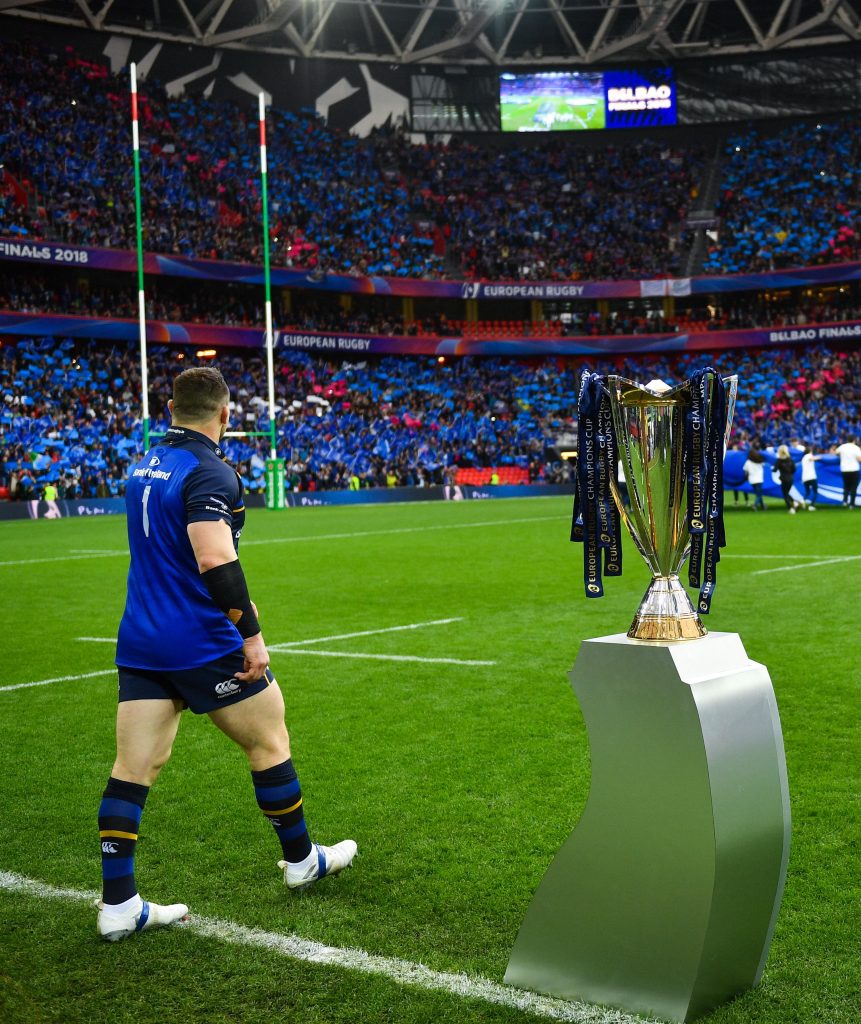 On matchday, I would be there about five hours before kick-off to chat to EPCR as the club photographer, as we get a little more access, and to chat to Marcus (Marcus Ó Buachalla, Senior Communications & Media Manager for Leinster Rugby) about how the day is going to work for us, what passes and bibs we need and things like that.

We would also take a look at the dressing room set-up. Ideally, should Leinster win you would do some pictures there afterward with a small studio set-up.

After the dressing room run-through, I head to do some fan pictures and then wait for the team to arrive. Then you’re into match mode. 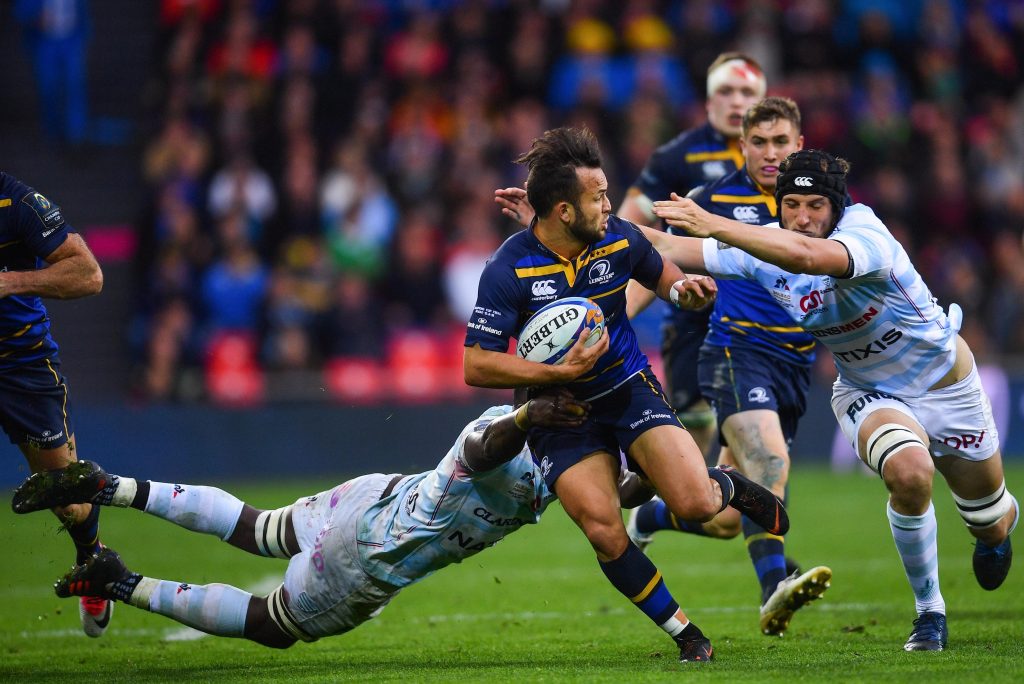 Only a few days beforehand, my presence in Bilbao was looking very unlikely. My partner and I were due our second child on the 8th, four days before the final, with the team flight due to leave on the 10th. Great news of course, but the photographer in me couldn’t help but think I would be missing the final!

As Leinster finished top of their pool, then won the quarter-final against Saracens, it was becoming apparent an appearance in the final was becoming a very real possibility.

Various plans were put in place, from day-tripping to Bilbao, to not making it at all. Thankfully, Georgia got the message and arrived four days early, which meant it was safe to depart for a few days in the sun in the Basque Country.

Unfortunately, the weather in Bilbao was miserable! I was sitting in waterproofs most of the game and it wasn’t the prettiest of matches. No tries and a tough game to photograph. Thankfully, the end made up for it.

It was close for the whole game. Then Racing gave away a penalty under the posts in the 78th minute and Isa kicked it over. So then that was a picture, with Leinster leading by three very late on. 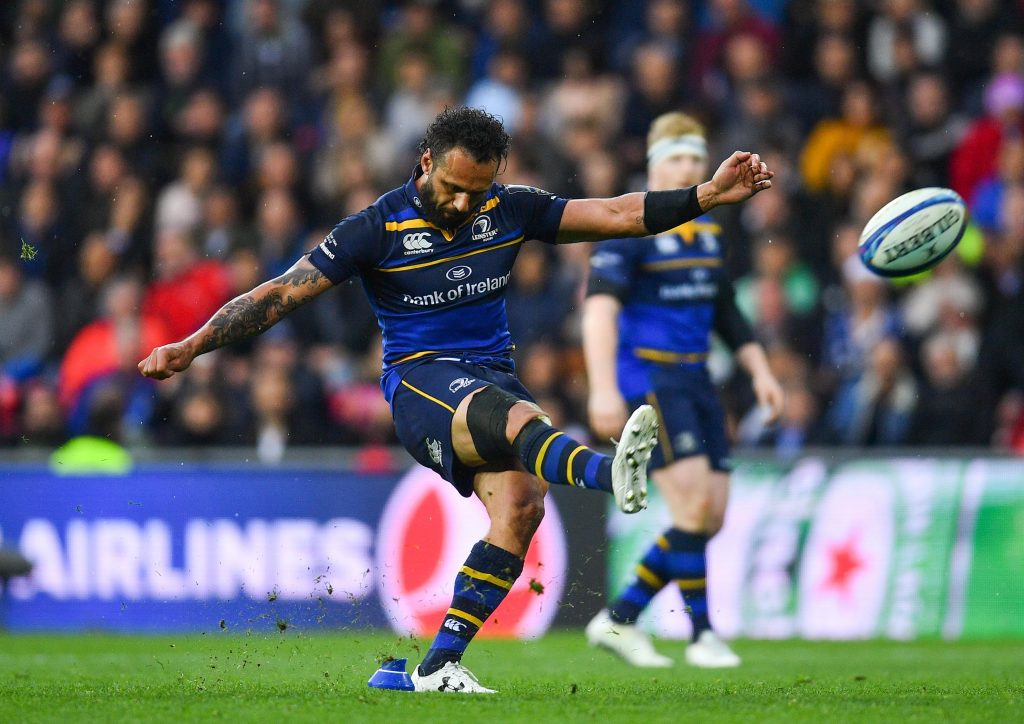 I’m always at the end that Leinster are attacking, so after the Isa kick so late I knew Racing were looking for a drop goal at the other end.

When the pass came back to Rémi Talès you knew straight away to photograph him lining up for the kick. I got James Ryan, Jack Conan, and Scott Fardy chasing him down – and then the ball went wide. 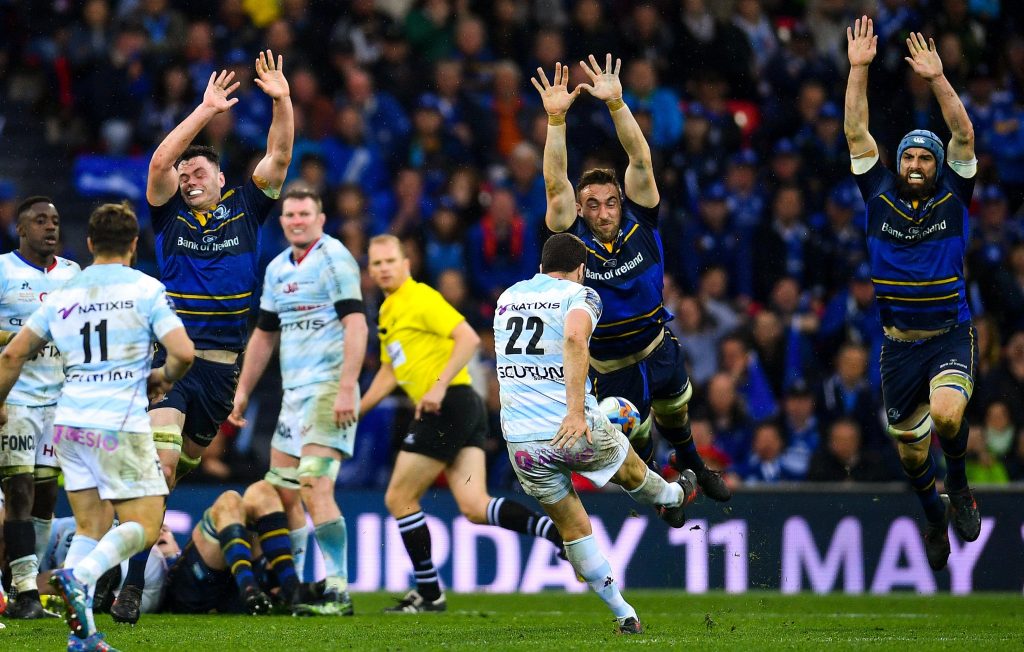 I quickly looked through those pictures, found the best frame and sent that off the back of the camera to the office in Dublin so they can get that picture out.

When the final whistle goes, I quickly ran on to the pitch to get the players celebrating. You probably have five minutes of that and then you’re straight over to get your position for the trophy lift. Thankfully as the club photographer, I’m given a centre position so I can photograph it head-on. 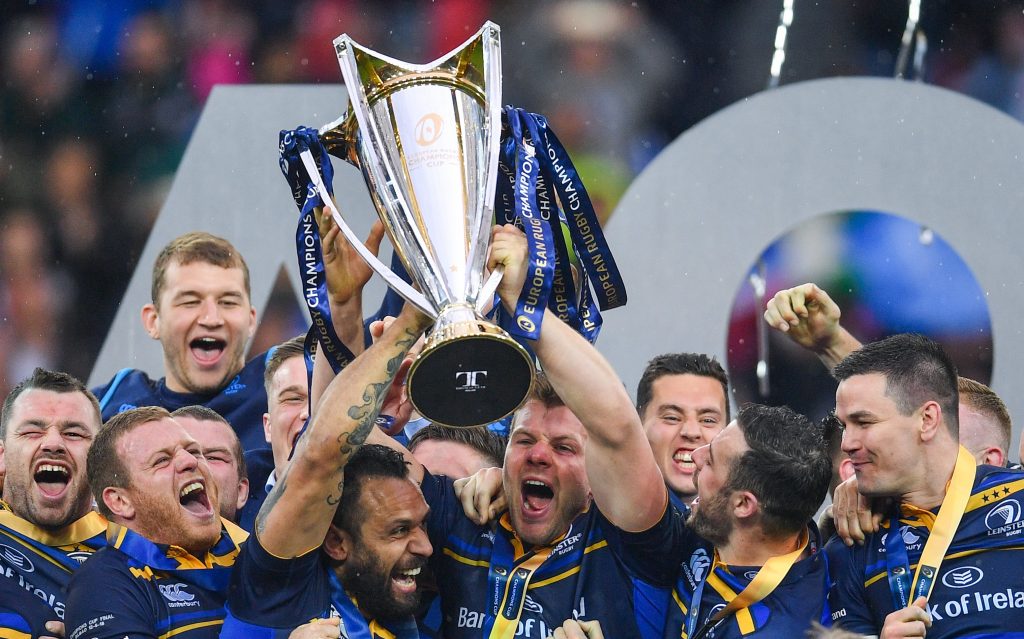 After that, I shot the lap of honour for 15 minutes or so and by the time I made it into the dressing room about half of the squad had beaten me in there.

It was all quite calm until the cup came in. This gave me some time to send some more pictures so that Leinster’s social media and newspapers could have access to them. 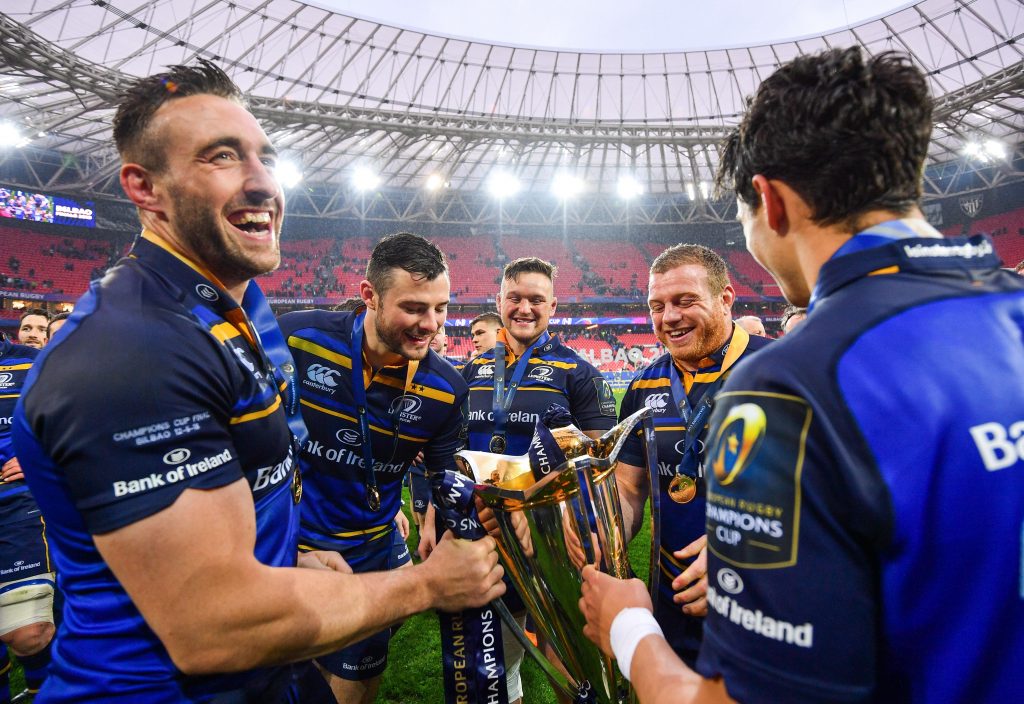 The players were all sitting at their own spot and all pretty tired. Then once Dan Leavy brought in the cup all the celebrations really started. The whole squad together and everybody was up and singing and cheering and all that. We did a team picture and then I set up the studio next door.

All the players and staff had the chance to come in for their own pictures, so I would have been in there for another 40 minutes or so.

It’s a long and busy few days, but experiences like Bilbao make it worthwhile.

Hopefully, when rugby returns, there will be more days like it to come.

To see more photos, or to purchase a print, visit sportsfile.com.