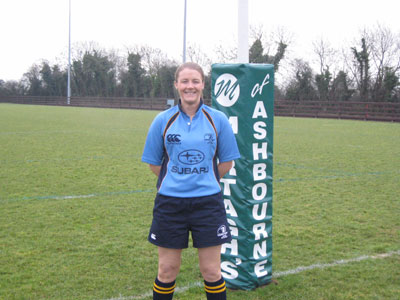 Helen, 35, works as a Civil Servant and lives in Ashbourne, Co. Meath.

She first played rugby for 10 years having become interested in rugby in the late 90’s after travelling in Australia and joined Ashbourne RFC upon her return to Ireland in 2000.

Helen played with Ashbourne as outside centre for five years, before moving to St Marys RFC in Templeogue.

She moved into the second row for St Mary’s and played with the club for five more years and says: “This allowed me to see the game from both a forwards and a backs perspective. I decided to hang up my boots in 2009 after winning AIL Division 2 league with St Mary’s.”

Even though she retired from rugby she always wanted to remain involved and to give something back to the game.

“For years we always had guys sacrificing their time to coach us; to mention but a few Declan Mahon in Ashbourne and Pat Crawford and the late Paul Flood in St Mary’s and I believe taking up the whistle is my way of giving something back.”

She began refereeing in Tag Rugby competitions and it was from there that she developed to the 15-a-side Union game through the Leinster Rugby Refereeing pathway.

“The Leinster Rugby referees have been most supportive of me throughout the whole process. So far I have been amazed at the support I have received from Ashbourne RFC, especially from fellow refs Declan Mahon and Kevin Beggs but also from the Chairperson Rod Cosgrave, they have encouraged, mentored and supported me every step of the way.”

“At first it was hard to make the switch from the mindset of being player to referee, and I now regret the hard time I used to give to referees. I now realise that as a player, I wasn’t always right!

“Being a female ref hasn’t posed any difficulties for me to date, the biggest issue players seem to have with it is whether to call me sir or miss!”

Leinster Rugby Referees President Fran Nolan commented: “We in the Association are delighted that Helen has joined and it is hoped that more women will take up refereeing as the game is growing fast.”