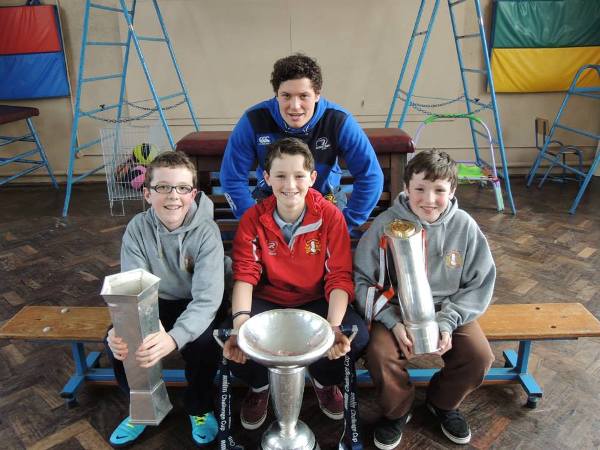 The biggest crowd of the week was present in our very first school of the week with all 480 pupils packed into the school hall in St Anne’s National School, Shankill.

Pupils had the chance to not only hold the trophies but to grill the Leinster representative present on all things rugby as well as having the chance to win Leinster merchandise if they answered our questions correctly.

Ashbourne, County Meath, was port of call the following day with a special mention going to Gaelscoil na Cille where pupils were decked out in their Leinster Blue to greet us.

One of the highlights of the week was in Cushenstown National School. Parents, pupils and teachers turned the school Leinster Blue, pupils were wearing their Leinster colours and their own clubs kits. We were even treated to a few songs thanks to the pupil’s skills on the tin whistle.

Kildare town was our last stop of the week and was once again a great day where we met hundreds of huge fans. Pupils in Scoil Bhride, Milltown welcomed us on Friday afternoon.

All pupils had photos with the trophies and even challenged us to partake in their table tennis competition where we were well beaten by the top quality players in the school!

This week we will visit Louth and Meath when we drop into schools around Dundalk RFC and Rathoath RFC so keep an eye out for the trophy tour posters in your school.

Keep up to date on exclusive news and photos from the tour by following Leinster Trophy Tour on Facebook and @LeinsterTrophyT on Twitter.

Email:  trophy@leinsterrugby.ie  but please note the trophies are only available as a trio.