Leinster School of Excellence returns in 2020 for its 23rd year 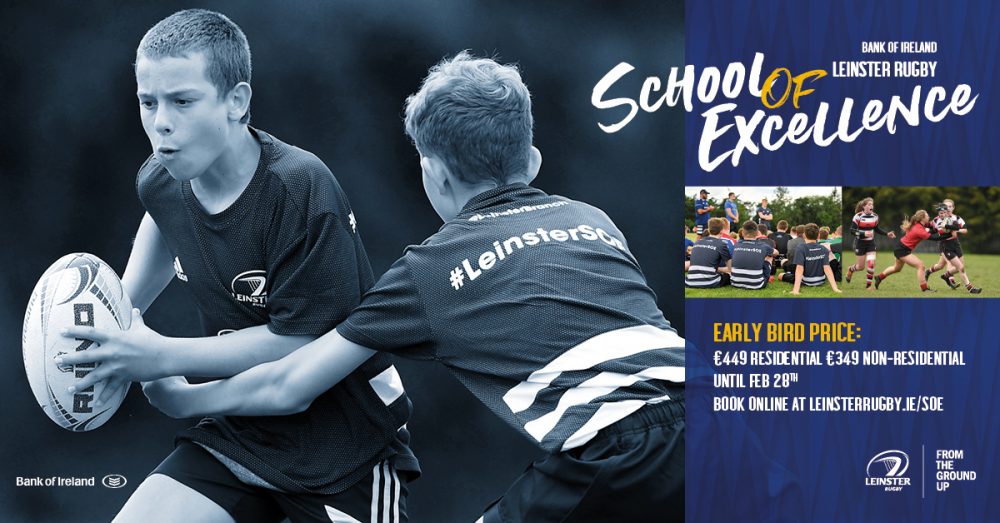 The Bank of Ireland Leinster School of Excellence is back for its 23rd year and will be returning to The King’s Hospital for four weeks in July and August. Last summer saw Leinster SOE hit 1,100 participants and due to popular demand, the reintroduction of a second girls’ week is back for summer 2020.

Numbers attending these camps are growing year-on-year as over 1000 girls and boys took part in Leinster SOE last summer. Camp attendees come from all over Ireland, Europe, and from countries such as Dubai, Canada, Japan and America.

Players are challenged both technically and tactically over the course of the week, through the Game-Based Approach, to the pitch session, and with daily video analysis. With an additional two-hour coaching session on each Friday and Leinster Rugby guest speakers each week, spaces will fill up fast so sign up now.

Take advantage of our Early Bird offer and book your week-long camp for only €449 Residential and €349 Non-Residential until 28 February 2020. The normal price for a place on the Bank of Ireland School of Excellence is €499 (residential) and €399 (non-residential). Secure your place on the Bank of Ireland Leinster School of Excellence with a €100 deposit. We also offer recurring payments free of charge.

Note: the girls’ and boys’ camps are separate camps which run alongside each other.

Live like a professional player for a week, with fully accredited coaches, guest speakers and much more.

Stephen Maher, Leinster School of Excellence Camp Manager, added:  “Year on year SOE has grown in numbers and stature and this year will be no different. Summer 2020 will be our 23rd year running the Leinster School of Excellence in The King’s Hospital School. The content of the camp has been developed to reflect the modern game and as a result, has become the highlight of the summer calendar for many young players. All players will notice a difference after attending the rugby programme and we’re hopeful that they can bring their newly developed skills back to their club and school game for the following season. Summer ’19 saw the numbers attending SOE hit 1,100 participants and due to popular demand, the reintroduction of a 2nd girls’ week. We look forward to welcoming more players to School of Excellence in Summer 2020.”

Declan Fassbender, Community Rugby manager, said: “Leinster SOE goes from strength to strength each year. Two great things to see throughout the weeks are – the improvement in skills and decisions of the 1000 plus boys and girls and as importantly the new friendships that are formed between people from all across Ireland and indeed the multiple other countries who travel far and wide to experience the unique atmosphere that is Leinster SOE.”

Book a place now or for more information visit leinsterrugby.ie/soe.

Why attend the Leinster School of Excellence?