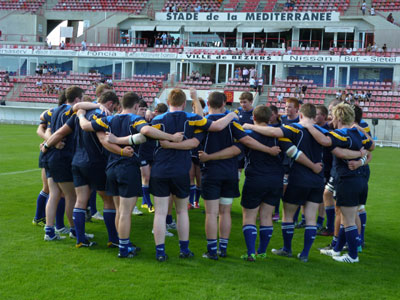 Leinster Under-18 schools, sponsored by Nivea for Men, completed their tour of France with a 31-13 victory over Languedoc ‘A’ in Stade de la Municipalee in Beziers…

Tries by Dylan Donnellan (2) in the the 13th and 53rd minutes, Stephen O’Neill in the 26th minute, David Doyle in the 33rd minute and Ian Fitzpatrick in the 70th minute with Conor McKeon kicking two conversions and Billy Dardis one making up the scorers on a hot and humid afternoon in Beziers.

Meanwhile, Leinster Under-18 schools, sponsored by Nivea for Men, defeated a Languedoc selection 40-14 in a hot and humid evening in Gruisson on Wednesday night.

The team are now preparing for their second fixture on Saturday afternoon in Stade de la Mediterannee in Beziers with a kick off time of 4.30 p.m.