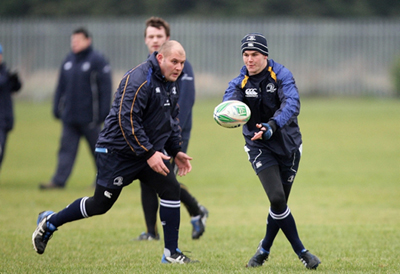 The Leinster squad to face Brive in Saturday’s Heineken Cup round 5 clash at the RDS (KO: 6pm) has been named…

Shane Horgan, who became only the second Leinster player to pass the 25-try mark in Europe in the recent 39-7 victory over the Scarlets – is named in the extended panel alongside Brian O’Driscoll who was the first Leinster player to reach the landmark.

The Ireland duo, who alongside Rob Kearney and Gordon D’Arcy were also try-scorers last time out in the round 4 Heineken Cup victory, are named in the squad alongside the likes of Nathan Hines, Isa Nacewa and CJ van der Linde.

Cian Healy and Jonathan Sexton could both be in line to make their 50th appearances for the province should they feature in Saturday’s game.

The team is expected to be announced on Friday lunchtime.

Almost 14,500 tickets have now been sold for the visit of Brive on Saturday and tickets are still available HERE, from Ticketmaster outlets nationwide and can be purchased from the Leinster Rugby Store and Spar shop in Donnybrook. Ticketmaster will also be selling tickets at the RDS from 3pm this Saturday.

Meanwhile, the Family Day is back following the Christmas Break with the Canterbury Skills Challenge, Rugby Games and relays, and the usual fun, games and giveaways from the Spinnies and 98 Thunders. Of course Leo the Lion will also be on hand to meet and greet our younger supporters. There will also be a half time mini rugby exhibition between Navan and Tullamore.