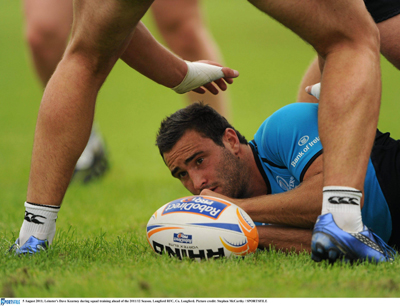 The Leinster squad stepped up their preparations this week ahead of the start of the Bank of Ireland series which kicks off this Friday night when the province faces Super 15 side the Melbourne Rebels in Donnybrook (KO: 7pm)…

Eoin O’Malley (ankle) is progressing well following surgery earlier this summer but this week’s game is likely to come too soon for him and for Shane Horgan (knee) also. Prop Simon Shawe (quad tear) is also a doubt.

Academy centre Eamonn Sheridan, who missed a large part of last season after fracturing his ankle, is available for selection. He features in a squad which includes summer signings out-half Mat Berquist and second row Steven Sykes.

Former Leinster Academy graduates Fionn Carr and Jamie Hagan are also set to make their seasonal debuts following their move home from Connacht. Though the squad will be without those who are involved on Ireland duty, there will be a blend of youth and experience against the touring Australian side.

Andrew Conway and Brendan Macken, who were both involved in the Ireland Under-20 squad at the IRB Junior World Championships in June, are in the frame alongside the likes of hooker Richardt Strauss.

The team is expected to be named at Thursday lunchtime.