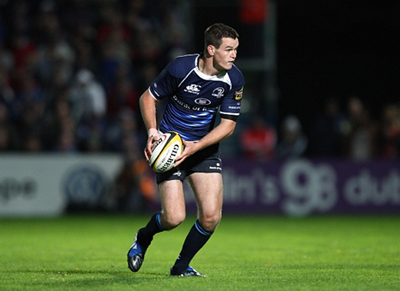 The Leinster squad to face the Glasgow Warriors in Friday night’s Magners League clash at the RDS (KO: 8pm) has been named…

Jonathan Sexton has recovered from injury to take his place in the extended panel alongside wing forward Shane Jennings – who will captain the side – for the visit of the league leaders to the RDS.

The St. Mary’s College duo join 11 other Ireland internationals – including the likes of Jamie Heaslip, Rob Kearney and Brian O’Driscoll – while there are also 10 recent graduates from the Leinster Academy in the squad.

Nathan Hines, Isa Nacewa and Stan Wright are also in contention for selection and the team is expected to be named on Thursday lunchtime.

The Family Day is back following the Christmas Break with the Canterbury Skills Challenge, Rugby Games and relays, and the usual fun, games and giveaways from the Spinnies and 98 Thunders. Of course Leo the Lion will also be on hand to meet and greet our younger supporters and supporters can also test their driving skills on a giant Scaletrix track in the supporters bar courtesy of official partner of Leinster Rugby, Volkswagen. There will also be a half time mini rugby exhibition between Terenure College and Wexford Wanderers.

Over 13,500 tickets have now been sold for this Friday’s top of the table Magners League game against the Glasgow Warriors and tickets can be purchased HERE, Ticketmaster outlets nationwide and the Leinster Rugby Store and Spar shop in Donnybrook. Ticketmaster vans will also selling tickets outside the RDS from 5pm on Friday. Tickets also remain on sale on www.leinsterrugby.ie for the Pool 5 Heineken Cup clash against Brive in the RDS next Saturday, 16th January (KO: 6pm).