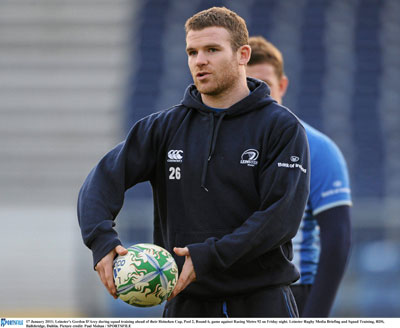 It is hoped that Gordon D’Arcy, who picked up a calf strain in the build up to Saturday’s 43-20 victory over Saracens in the RDS, will be available for selection. Both D’Arcy and Jamie Heaslip (ankle) will be monitored this week ahead of Thursday’s team announcement prior to the squad’s departure to Paris.

There were no other fresh injury concerns for Leinster ahead of the final round encounter with try scorers Dominic Ryan, Sean O’Brien, Fergus McFadden, Isa Nacewa and Eoin O’Malley all in the frame.

Jonathan Sexton’s 13 point haul in the RDS brought his tally in this year’s competition to 55 points, bringing his career tally in Leinster colours in all competitions to 424 points in 66 games.

The number of supporters attending all Leinster games this season passed the 300,000 mark at the weekend (305,014) and in excess of 600 Leinster supporters are expected to make the trip to Paris this weekend.