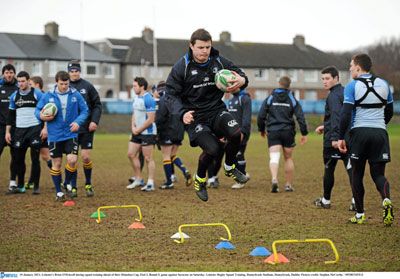 The Leinster squad trained in Donnybrook on Monday afternoon ahead of the visit of Saracens to the RDS in Saturday afternoon’s Round 5 Heineken Cup clash (KO: 1.30pm)…

Sean O’Brien, who was rested for the 15-10 victory over the Ospreys, rejoined the panel and will be available for selection while the injuries sustained by Cian Healy (hamstring), Jamie Heaslip (ankle) and Jonathan Sexton (calf) from Friday night’s victory will be monitored this week, though it is hoped that all three will be available for selection.

Out-half Jonathan Sexton, who scored 25 points in a man of the match display in the reverse fixture in Wembley Stadium in October, has accrued 42 points to date in this year’s competition.

Brian O’Driscoll, meanwhile, is currently in third place in the overall top try scorers list in the Heineken Cup (28 tries), three behind Toulouse’s Vincent Clerc and just one ahead of his provincial colleague Shane Horgan who now lies in sixth place in the competition’s all time appearance list with 82.

The Leinster team will be announced at midday on Friday.