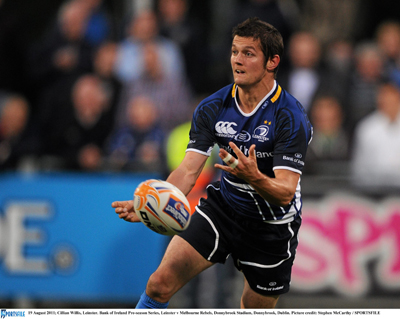 The Leinster squad trained in UCD on Monday afternoon ahead of the second game of the Bank of Ireland Series when they welcome Northampton Saints to Donnybrook on Friday night (KO: 7pm)… TICKETS ON SALE NOW…

The management are hopeful that David Kearney, who missed last weekend’s 14-13 victory over the Melbourne Rebels with a minor calf strain, will be available while second row Damian Browne is also in the frame for his debut against his former club.

It is expected that Ireland trio Luke Fitzgerald, Shane Jennings and Kevin McLaughlin will be available for selection after their involvement in Ireland’s pre World Cup training camp.

They will join fellow Ireland international Rhys Ruddock, a try scorer in the Rebels victory, as well as Mat Berquist who put in a strong showing on his first start for the province since his summer move from the Canterbury Crusaders. Simon Shawe could also be in contention for selection as he stepped up his rehabilitation following a quad strain.

Eoin O’Malley has recovered well after undergoing ankle surgery earlier this summer and may also feature in this Friday’s squad.

Incidentally, of the 15 players who finished last weekend’s victory, 13 had graduated from the Leinster Academy including Fionn Carr and Jamie Hagan who both featured in their first games since their return to their home province.

The team is expected to be named on Thursday lunchtime.