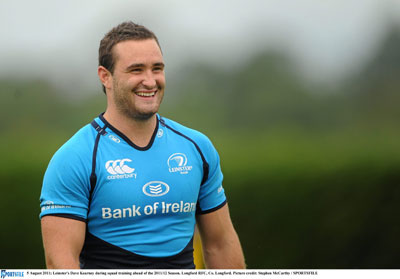 The Leinster squad trained in UCD on Monday afternoon ahead of the RaboDirect PRO12 season opener this Friday night against the Ospreys in the Liberty Stadium (KO: 7.05pm)…

Isa Nacewa, Eoin O’Malley and Richardt Strauss are expected to be available for selection ahead of Leinster’s trip to Swansea this weekend. O’Malley was a late withdrawal from the line up for the Bank of Ireland Series clash with Northampton due to illness.

Following scans at the weekend, Eamonn Sheridan’s knee injury is worse than first thought. Ligament damage is likely to rule him out until the new year.

Steven Sykes suffered a medial ligament injury which is expected to rule him out for the opening two to three weeks of the campaign while Andrew Conway damaged his ankle which will rule the Ireland Under-20 back out of Friday night’s game in Wales.

Shane Jennings’ call up to the Ireland World Cup squad means that there will be 14 Leinster representatives on duty in New Zealand including Isaac Boss and debutant Sean Cronin who both featured in the Bank of Ireland Series game against Northampton Saints on Friday night.

David Kearney successfully came through his first game of the season while the squad will also include Fionn Carr who scored his first competitive try on Friday night since his return to the province this summer. Other Leinster Academy graduates in the mix are Jamie Hagan, Rhys Ruddock and Dominic Ryan.

The team will be announced on Thursday lunchtime.