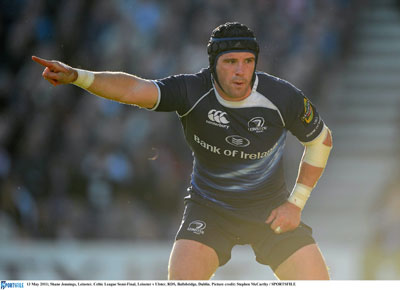 The Leinster squad geared up for Saturday afternoon’s Magners League Grand Final against Munster in Thomond Park (KO: 5.05pm) with a training session in UCD on Tuesday morning…

Fresh from Saturday’s Heineken Cup triumph, the squad were put through their paces with the management reporting no fresh injury concerns ahead of this weekend’s Grand Final.

Jonathan Sexton’s 28 point haul brought his season tally in both competitions to 228 points in a game which was his 75th in Leinster colours. On the other end of the scoring spectrum, Leinster’s only other points scorer on Saturday was Scotland second row Nathan Hines who touched down for the first time in 45 appearances for the province.

Brian O’Driscoll successfully came through Saturday’s victory following the knee injury which had rendered him doubtful in the build up to last weekend’s game and the Ireland captain showed no ill effects and is expected to be available for selection this weekend.

Isa Nacewa’s next appearance, meanwhile, will be his 75th for the province.

The team will be announced on Friday lunchtime.

In a further boost, Leinster will be backed by a travelling support of well in excess of 6,500 followers in Thomond Park this weekend which will be the largest following to an away interprovincial league decider in the province’s history.