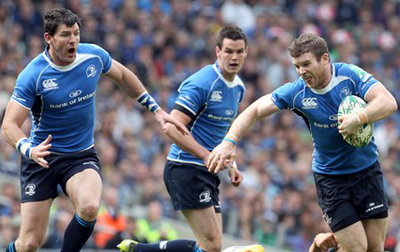 The Leinster squad trained in the RDS on Monday morning as the province began on-field preparations for Saturday’s Heineken Cup final against Northampton Saints in the Millennium Stadium (KO: 5pm)…

There were a number of injury concerns arising from Friday night’s 18-3 interprovincial victory over Ulster in the RDS, which cemented Leinster’s place in the Magners Grand Final.

Following medicals on Sunday, it is thought that Isaac Boss (tight hamstring), Brian O’Driscoll (knee) and Richardt Strauss (bruised hip) should all be back training by Wednesday and be available for selection this weekend.

Sean O’Brien suffered a cut above his eye in the closing minutes of the game while Mike Ross (shoulder) was replaced by Stan Wright on the half hour mark as a precaution and the Ireland tight-head prop has recovered well from the ‘stinger’ injury sustained in the win.

It is also anticipated that Shane Horgan will be at full fitness to train this week. Horgan is Leinster’s most capped player in the Heineken Cup (27 tries in 86 games) and he lies three tries behind O’Driscoll who could be set to make his 75th appearance in Europe.

Jonathan Sexton’s six-point haul against Ulster helped him to reach a combined total of over 200 points in the Heineken and Magners competitions so far this season, while his 22 point haul in the Heineken Cup semi final victory over Toulouse took the out-half past the 200 point career total (209 points) in 21 European games. O’Brien has scored four tries in eight Heineken Cup encounters so far this term.

Meanwhile, with the province selling out their full ticket allocation for Saturday’s final it is anticipated that in excess of 15,000 Leinster supporters will travel from Ireland to the Welsh capital this weekend, with thousands more expected from across the UK and Europe.

The Official Leinster Supporters Club (OLSC), in association with Bank of Ireland, have published a travel guide which can be downloaded from www.leinsterrugby.ie from Tuesday morning.