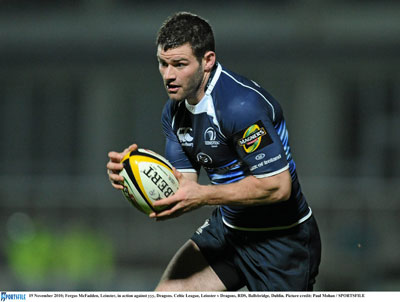 The Leinster squad stepped up their preparations for Saturday’s Magners League Interprovincial derby against Ulster at the RDS (KO: 8pm) with a training session on Monday evening in UCD…

There were no fresh injury concerns for the province from their Heineken Cup Quarter Final 17-10 victory over Leicester Tigers with Gordon D’Arcy (shoulder), try-scorer Isa Nacewa (foot) and Brian O’Driscoll (nose) expected to resume training after picking up minor knocks at the weekend.

Shane Jennings returned to training last week and it is hoped the Ireland wing forward will be in contention for selection for Saturday’s derby.

Nacewa has now accumulated 142 points (including 4 tries) in this year’s Magners League. Meanwhile, Jonathan Sexton’s 12 point haul on Saturday evening pushed him past the 500 point mark in Leinster colours and 163 points from that tally have come so far this season in 14 games.

Saturday night will be a specially themed ‘Ladies Night’ with proceeds going to Action Breast Cancer, one of Leinster’s four official charities this season. There will be a pre- and post-event in the Serpentine Hall at the RDS taking place around Leinster’s Magners League clash with Ulster. There will also be lots of activity happening in the grounds including free tasters of strawberries and cream kindly provided by Superquinn for the ladies. Leinster is also looking for Ladies to pick the music for the night – check out the Leinster Facebook page at www.facebook.com/leinsterrugby and leave your choice.

The theme of this year’s event is ‘Give Breast Cancer The Boot’ and an exclusively designed Leinster supporters club t-shirt will be on sale on the night for just €;20. All proceeds from the sale of the t-shirt will go directly to Action Breast Cancer. Ladies are encouraged to don their best blue outfits on the night and there will be a best dressed ‘blue-belle’ which is sponsored by Bank of Ireland.

The pre-match bash will kick off from 6:30pm in the Serpentine Hall where ladies will be treated to strawberries and cream, a glass or two of champagne, live music, and some pampering with mini manicures and massages. There will also be exclusive goodie bags for guests on the night and the chance to win a signed Leinster jersey. Post-match there will be live music, player appearances, drinks and a Leinster supporters’ blind date competition!

Over 15,000 tickets have been sold for Saturday’s game and tickets are on sale now HERE