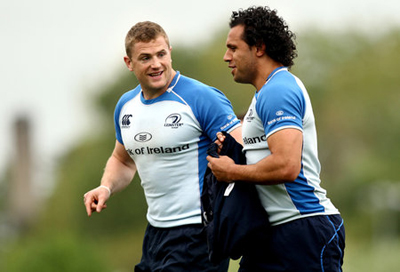 The Leinster squad trained in UCD on Monday with the management reporting no fresh injury concerns ahead of Saturday’s Heineken Cup semi final against Toulouse in the Aviva Stadium (KO: 3.30pm)…

Cian Healy and Sean O’Brien, the try scorers in the 20-8 victory over Aironi, were amongst 14 Irish qualified players who started the match, alongside Scotland’s Nathan Hines.

Gordon D’Arcy (who made his 75th Heineken Cup appearance in the victory over Leicester) and Jamie Heaslip are expected to be available for selection. Likewise Isa Nacewa should be back in contention after he was left out of the squad for the first time this season on Saturday.

Jonathan Sexton’s 12 point haul in the 17-10 Quarter Final victory over Leicester Tigers took him to the top of the points scorers chart with 88 points in this year’s competition so far. While wing forward O’Brien lies in joint third place in the European try scorers list (4 tries) this season.