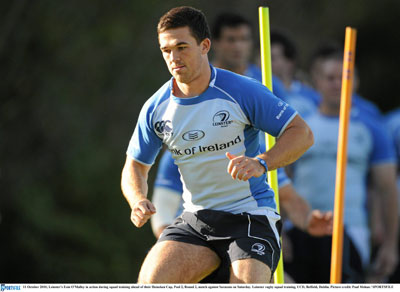 Leinster’s training session in UCD on Tuesday was cancelled as assembling the squad was deemed impossible in the conditions.

The province will attempt to find somewhere to train on Thursday or Friday of this week to start their preparations ahead of the Magners League interprovincial derby against Ulster in Ravenhill on Monday, 27th December (KO: 4pm).

Leinster look set to be without a number of players who are being rested as part of the IRFU Player Welfare Programme. With a five day turnaround to contend with ahead of the visit of Connacht to the RDS on New Year’s Day there will be opportunities for youth to stake a claim.

A question mark remains over the availability of Eoin O’Malley (rib) who missed the 24-8 victory over ASM Clermont Auvergne at the weekend and his progress will be monitored over the coming days. Aside from that the province didn’t suffer any fresh injury concerns from the Aviva Stadium encounter.

With three busloads of supporters from the Official Leinster Supporters Club (OLSC) set to travel to Belfast, Leinster will be boosted by the backing of several hundred followers ahead of two crunch derbies.

Already close to 15,000 tickets have been sold for the Connacht game in the RDS and tickets are still on sale from ONLINE HERE and from the usual outlets.