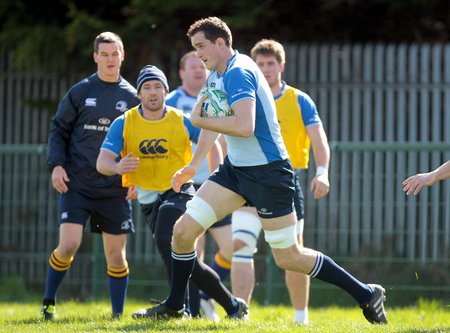 The Leinster squad stepped up their preparations for Saturday’s Heineken Cup Quarter Final against Leicester Tigers at a sold out Aviva Stadium (KO: 6pm) with a training session on Monday afternoon in UCD…

Second seeds Leinster host the English high-flyers this weekend in the province’s eighth appearance in the Quarter Finals having topped Pool 2 and the Leinster management report no new fresh injuries from the weekend derby against Munster in Thomond Park. Shane Jennings will continue his rehabilitation and at this stage the St. Mary’s College flanker hasn’t been ruled out of Saturday’s game.

Shane Horgan – a try-scorer on his 200th Leinster cap – successfully coming through his landmark appearance and lies in fourth place in the overall number of tries in the Heineken Cup (27 tries in 84 Heineken Cup appearances), two behind Brian O’Driscoll (29 tries in 72 appearances).

Jonathan Sexton currently leads the top points chart in this year’s competition to date (76 points) and brought his season tally in Leinster colours past the 150 point mark (151) in Limerick. He now requires just 5 more points to pass the 500 point mark for the province. Wing forward Sean O’Brien currently lies in joint third place in the top try-scorers chart (4 tries).

Saturday’s knock-out tie will be the eleventh meeting between the two sides in the competition’s history with both sides evenly matched at five wins apiece.

Meanwhile, following renewals for 2011/12 season tickets over the last fortnight, already over 9,500 Leinster season ticket holders have renewed for next season which represents a huge boost ahead of Saturday’s Quarter Final. Season Tickets are open to the public from tomorrow (Tuesday, 5th April) from 10am on www.leinsterrugby.ie/seasontickets