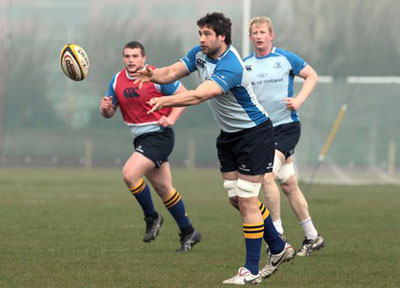 The Leinster squad trained in UCD on Tuesday afternoon ahead of Saturday night’s interprovincial derby against Munster in Thomond Park (KO: 7.30pm) with several more Ireland internationals in line for a return…

Gordon D’Arcy, Cian Healy, Sean O’Brien, Brian O’Driscoll and Mike Ross could all figure after being rested for Sunday’s 26-16 victory over the Dragons while there were no fresh injury concerns for the province, except the usual bumps and bruises.

Shane Horgan successfully came through his first game in two months and the Boyne man’s next appearance will be his landmark 200th in Leinster colours. Meanwhile, Eoin Reddan – a precautionary late withdrawal from the replacements bench – is also in line for selection on Saturday.

Jonathan Sexton’s 16 point haul helped lift the province to joint second place in the table and he is now 23 points shy of the 500-point mark for the province in all competitions. Isaac Boss’ first half try was his fourth in 22 appearances so far this season.

Shane Jennings remains a doubt as he continues his rehabilitation and a decision on his availability for Saturday’s game will be made later in the week.

It is anticipated that over 3,000 Leinster supporters are expected to make the trip to Limerick on Saturday.