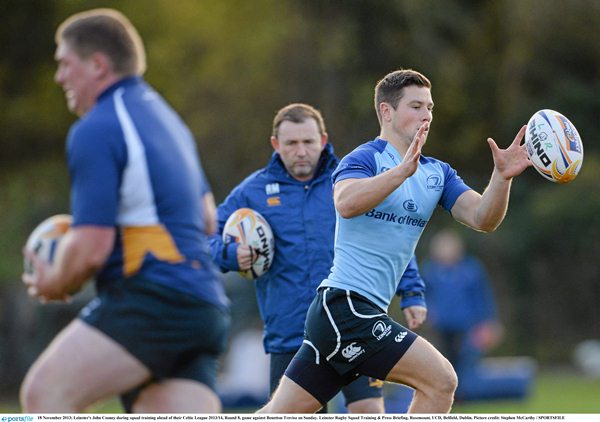 The Leinster squad trained in UCD on Monday afternoon as the province build up to their RaboDirect PRO12 clash away to Benetton Treviso in Stadio Comunale di Monigo (KO: 3pm local time, 2pm Irish time)…

There will be an opportunity this week for the wider squad to build on the last round’s away victory against the Dragons but the management will travel to Italy without those internationals who have been selected for Ireland’s clash against the All Blacks.

One player who the management will have to plan without is New Zealand centre Andrew Goodman who suffered a setback in his rehabilitation and will now undergo a procedure on his Achilles tendon which is set to sideline him for the next few months.

Leo Cullen has stepped up his rehabilitation in recent weeks but a return to play date has yet to be determined. The medical team are hopeful that back-row forward Jordi Murphy should return to action over the coming fortnight.

Those who are not involved on international duty this weekend will be available for selection and the management hope to be in a position to welcome back several of the squad who have been training with Ireland in recent weeks, which should be confirmed later in the week.

Scrum-half John Cooney’s next appearance will be his 25th for the province.

Meanwhile, ticket sales for December’s Round 4 Heineken Cup clash against Northampton Saints in the Aviva Stadium continue to be snapped up and sales have now passed the 30,000 mark. Tickets are on sale now ONLINE HERE.