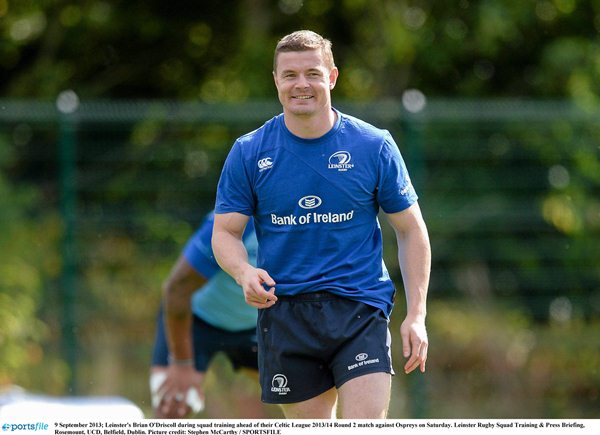 The Leinster squad have stepped up their preparations ahead of Friday night’s RaboDirect PRO12 clash against the Cardiff Blues in the RDS (KO: 7.35pm)…

There were several injuries arising from last weekend’s game in Glasgow and Shane Jennings will miss the next few weeks with a fractured bone in his right hand. Wallaby winger Lote Tuqiri (hamstring strain) is making good progress and the management expect him to be in the frame for selection ahead of Thursday’s team announcement.

It is hoped that the likes of Jamie Heaslip and Brian O’Driscoll will be available to join fellow Lions Cian Healy and Rob Kearney who featured for the first time in this campaign last weekend. The quartet were part of a large Leinster contingent involved in a two-day Ireland training camp in Kildare in the early part of the week.

Another international, Isaac Boss, is in line to make his 80th appearance for the province next time out.

Luke Fitzgerald and Quinn Roux have stepped up their rehabilitation in recent weeks and they could also come into the frame, while Darragh Fanning will also be available after withdrawing from the panel in Glasgow after picking up a minor knock in training. Sean O’Brien is also making good progress and should return to action in the coming weeks.

Ticket sales for Friday’s match are approaching the 15,000 mark and are on sale ONLINE HERE, Spar Donnybrook, the Leinster Rugby Store in Donnybrook as well as Ticketmaster outlets nationwide.