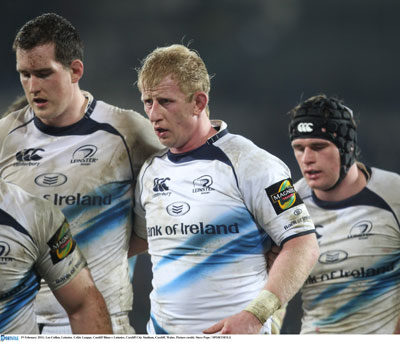 The Leinster squad stepped up their preparations for Sunday’s Magners League clash against the Dragons in Rodney Parade (KO: 2.30pm) with a number of international players set to re-join the panel on Thursday having been given extra time off after their Six Nations exertions…

Amongst those set to be included in the panel for Sunday’s game in Newport are Leinster skipper Leo Cullen while Eoin Reddan and Jonathan Sexton could also feature. Any decision on their availability will be made at Friday’s team announcement. Both Sexton and Devin Toner’s next appearances will be their 50th for the province in the league.

Fergus McFadden could be in the frame, while Stan Wright continued his rehabilitation during the province’s ‘A’ interprovincial friendly game in Connacht last weekend.

It is hoped, meanwhile, that Shane Horgan (knee) who has missed the last two months through injury will also be available for selection. Andrew Conway (ankle) is rated as doubtful for this weekend’s game.

With players such as Ian Madigan, Ian McKinley, Rhys Ruddock and Dominic Ryan all in the mix, the Leinster management expect to be able to call on a squad mixed with youth and experience for the first of two successive away ties in the Magners League before the Heineken Cup quarter final on April 9th.

Isa Nacewa’s 142 points to date in the Magners League puts him in joint third place in this year’s standing, while he joins Horgan and David Kearney as the province’s joint top try-scorers in the league with four to date.