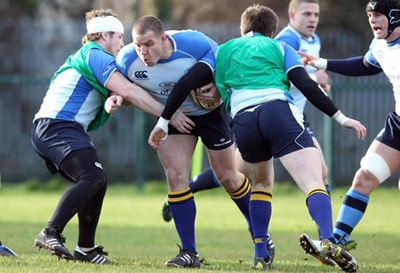 The Leinster squad trained in UCD on Monday afternoon as they prepared for Friday night’s Magners League clash in the RDS against the Scarlets (KO: 7.35pm)…

Though those who started Ireland’s victory against Scotland on Sunday are unavailable for selection, the squad may have the opportunity to welcome back a number of internationals to the panel later this week from Ireland camp including the likes of Leo Cullen and Fergus McFadden.

Nathan Hines could also feature for Leinster after coming on a replacement against Ireland.

Aside from the usual bumps and bruises coming out of the 30-5 victory over Treviso on Friday night, Stan Wright successfully came through his first start of the season in a match which saw Ian McKinley score his first senior try. The fitness of Stephen Keogh (ankle) will be assessed later in the week after he withdrew close to half time on Friday night.

David Kearney’s first half try was his fourth in his last three league outings, while Isa Nacewa’s 15 points completed a perfect 100% accurate kicking display for the 28-year-old in his debut match as captain. Andrew Conway’s late try was the 19-year-old’s third in eight league games so far this season.

In 22 games so far this season in both the Magners League and Heineken Cup, Nacewa has now scored 165 points (including six tries).

Over 14,000 tickets have now been sold for Friday’s game and are on sale now HERE, Spar (Donnybrook), the Leinster Rugby Store (Donnybrook), Champion Sports (Grafton Street) as well as all Ticketmaster outlets nationwide. Tickets will also be on sale at the ground on the night.