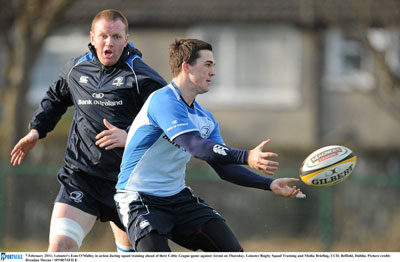 The Leinster squad stepped up their preparations for Friday night’s Magners League clash against Benetton Treviso at the RDS (KO: 7.10pm) with a training session in UCD on Monday afternoon…

There are no fresh injury concerns for the province following the weekend’s defeat to Cardiff, with Stan Wright coming through unscathed from his first outing of the season.

Shane Horgan continues his rehabilitation and again the medical team will assess his fitness during the week. It is also hoped that David Kearney will be available for selection after missing Saturday’s game with a minor niggle.

Leinster will be without their Ireland internationals as well as Scotland’s Nathan Hines, while a number of other players have been called up to Ireland squad duty and will report back to the province later in the week.

Former Leinster Youths centre Eamonn Sheridan and former Leinster ‘Section A’ Schools out-half Ian McKinley both successfully came through their first senior starts for Leinster bringing the number of Leinster Academy players to have been capped by the province so far this season up to six.

Dominic Ryan brought his season match tally up to 17 to date, while Ian Madigan’s substitute appearance was his 12th in all competitions. In fact, a dozen of the panel who featured in the Welsh capital on Saturday are recent products of the Leinster Academy.

Over 14,000 tickets have now been sold for Friday’s game and are on sale now HERE, Spar (Donnybrook), the Leinster Rugby Store (Donnybrook), Champion Sports (Grafton Street) as well as all Ticketmaster outlets nationwide. Tickets will also be on sale at the ground on the night.