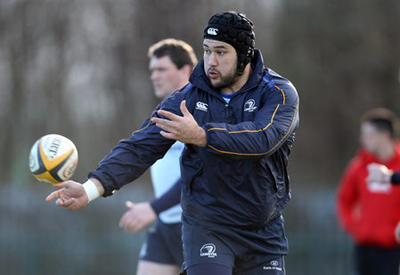 The Leinster squad continued their preparations ahead of Saturday evening’s Magners League clash against the Cardiff Blues in Cardiff City Stadium (KO: 6.30pm) with a training session in UCD…

Shane Horgan is continuing his rehabilitation on the knee injury this week, which was sustained in the away victory over Racing-Métro 92 in January, and a further assessment will be made before deciding on his availability for this weekend’s game in the Welsh capital.

It is hoped that Cook Islands prop Stan Wright (Achilles) will be available for selection for the first time since August as he stepped up his second successive week of full training with the province.

Meanwhile, Shaun Berne is in contention while there is a possibility that some of the international players will be released from Ireland camp later in the week.

David Kearney’s try against the Italians last Thursday in the RDS was his third in six league games, while Isa Nacewa’s 11 point haul took him to 147 so far this season over 20 games in all competitions so far this season.

The victory over Aironi did come at a cost for the province, however, with Ireland Under-20 centre Brendan Macken suffering a broken collarbone on his debut which is expected to rule him out for between 6-8 weeks.