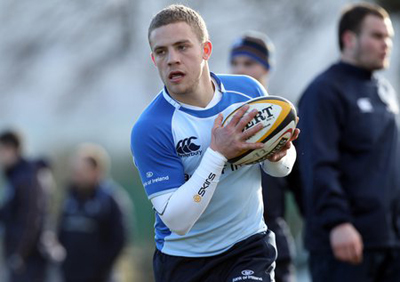 The Leinster squad trained in UCD on Monday afternoon ahead of Thursday night’s Magners League clash against Aironi Rugby in the RDS (KO: 7.05pm)…

Thursday’s game is the first ever encounter between the two teams since the Italian side’s entry into the Magners League this season and Leinster look set to welcome back several players who were involved in the Ireland Wolfhounds victory over England last weekend such as Isaac Boss, David Kearney, Eoin O’Malley and Dominic Ryan.

There is also the possibility of one or two other players being released from the larger Ireland squad, such as Devin Toner and/or Kevin McLaughlin.

Though the province will be without their Ireland internationals, Isa Nacewa – whose 113 points in this year’s competition leaves him in fourth place in the Magners League’s top points scorers list (16 behind Ospreys out-half Dan Biggar) – is available for selection alongside the likes of Richardt Strauss and Springbok prop Heinke van der Merwe who was a replacement in the province’s last game, the 36-11 victory away to Racing Métro 92.

In addition, several players who featured in the recent British & Irish Cup victories over Worcester Warriors and Currie could be in contention with Andrew Conway (who has scored six tries in five games in the B&I Cup to date) in the mix after featuring in the Ireland Under-20’s victory in Italy last weekend.

Stan Wright (Achilles) continues his rehabilitation and the medical team are pleased with his progress and are hopeful that he will be in line to return to action in the coming weeks.

Tickets for Thursday’s game have passed the 14,000 mark and are on sale now ONLINE HERE, Spar (Donnybrook), the Leinster Rugby Store (Donnybrook) as well as Ticketmaster outlets nationwide.