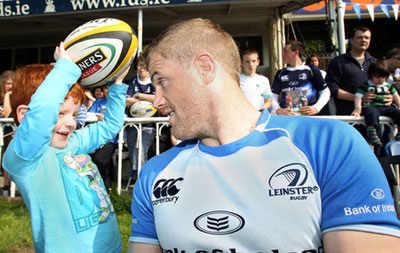 The Leinster squad trained at an Open Session in the RDS on Tuesday morning which was attended by over 1,700 supporters ahead of Saturday’s Magners League clash against Aironi Rugby in Stadio Luigi Zaffanella (KO: 2.30pm local time)…

Tuesday’s Open Session was the fourth undertaken by the squad this season after previous visits to Mullingar RFC, Wexford Wanderers RFC and Clondalkin RFC.

Shane Jennings successfully came through his first appearance in two months following Saturday night’s 34-26 victory over Ulster in the RDS and the Ireland flanker trained with the rest of the squad.

Gordon D’Arcy and Brian O’Driscoll – who both missed the interprovincial win through minor niggles – also trained on Tuesday and it is expected that both should be available for selection this weekend. There are no fresh injury concerns for the province.

Shane Horgan has now scored seven tries in 14 Magners League appearances so far this campaign. Cian Healy’s next appearance will be his 75th for the province, while fellow prop Heinke van der Merwe scored his first Leinster try in his 26th game this season.

The knocks sustained by Leo Cullen and Kevin McLaughlin in the second half of Saturday’s game are not thought to be serious and both should be in contention for the team which is expected to be named on Friday lunchtime prior to the squad’s departure to Italy.