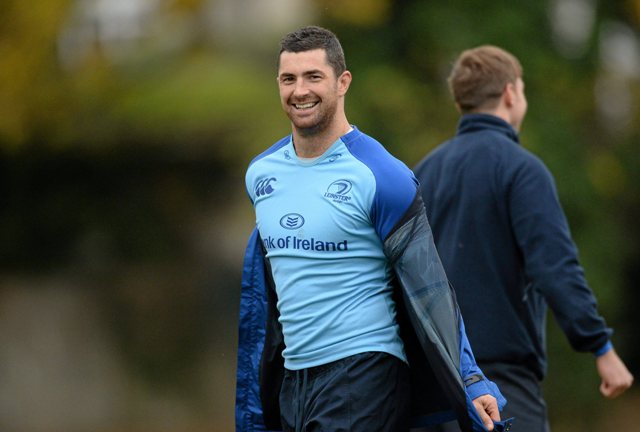 The Leinster team to face Castres in Sunday afternoon’s Heineken Cup Round 5 game in Stade Pierre-Antoine (KO: 1.45pm) has been named…

In total 12 players are retained from the team that lost to Northampton in December with Coach Matt O’Connor making changes at 10 and two changes in the back row.

After a strong performance off the bench last weekend against Connacht in the PRO12, Jimmy Gopperth starts at outhalf. In the back row, Rhys Ruddock has failed to recover from the calf injury suffered in the second half of the game in the Sportsground and as a result Kevin McLaughlin comes back in after a recent lay off with a thumb injury to take his place at 6. The other change sees Jordi Murphy retained at 7, with Shane Jennings on the bench.

Otherwise there is a familiar feel to the Leinster line up with Rob Kearney, Dave Kearney and Luke Fitzgerald as the back three, Fitzgerald having recovered from the illness that ruled him out of last weekend’s game at short notice.

Gordon D’Arcy and Brian O’Driscoll are once again selected in the centre while Jimmy Gopperth will be joined at halfback by Eoin Reddan.

In the pack, it is the same front five as selected in December, with Jack McGrath, Sean Cronin and Mike Ross in the front row, with Devin Toner and Mike McCarthy packing down behind.

In the back row Jamie Heaslip will captain the side from 8, with the aforementioned Murphy and McLaughlin beside him.

Sunday’s game also marks Rob Kearney’s 50th Heineken Cup appearance and as a result he will be awarded an ERC Elite Award. The Louth native will be presented with a specially commissioned ERC cap after the game and joins other Leinster players like Gordon D’Arcy, Leo Cullen, Shane Horgan, Brian O’Driscoll and Malcolm O’Kelly on the list.

Gordon D’Arcy is only five appearances short of 100 Heineken Cup caps and would become the first Leinster player to achieve such a feat.

There was further good news from the Leinster camp with the news that Fergus McFadden has come through training this week unscathed and will be in contention for a place in the squad for the visit of the Ospreys in Round 6 of the Heineken Cup next Friday.

The Official Leinster Supporters Club (OLSC) can confirm the following international coverage of the game this weekend:

UK & Ireland – Live on the red button on Sky Sports 2 and Sky Sports Xtra from 12.45pm (Irish time) and highlights on TG4 at 5.00pm Sunday
USA – Live on Fox Soccer 2 Go from 7.45pm ET Sunday (delayed on Fox Soccer Plus from 12 noon ET Sunday)
Asia – Live on Eurosport Asia from 8.45pm HKT Sunday
Australia – Live on Setanta Sports from 11.45pm AEDT Sunday
New Zealand – Live on The Rugby Channel from 1.45am Monday
Canada – Live on Sportsnet World from 7.45am Sunday
Radio – Live on RTE 2FM – on radio, on line and via app

See our Blue Planet guide for rugby friendly venues who play games in over 50 cities around the world (we recommend calling ahead to check) here (link to http://bit.ly/16SRPMT)