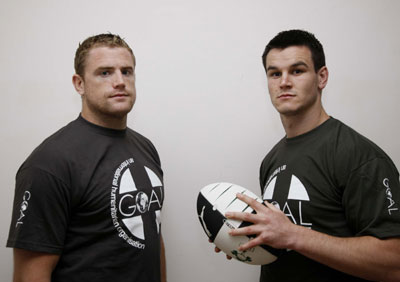 Heaslip and Sexton are both Patrons of the aid agency, and regularly champion their work, along with fellow Patrons and Leinster players, Sean O’Brien, Brian O’Driscoll, Luke Fitzgerald and Gordon D’Arcy.

GOAL’s team on the ground has been tankering water to some of the worst-affected areas to meet basic needs and to stave off health problems, due to lack of water.

The drought is particularly affecting pastoralist/desert areas of the country, where oxen, camel and goats are the main livelihood resources. Cattle are dying in large numbers and GOAL will shortly start a scheme to incinerate carcasses to prevent the spread of illness.

The agency is also engaged in well/spring maintenance and hygiene promotion.

In the event of an outbreak of disease, GOAL is ready to respond, with the provision of medicines, training and logistical support. In order to help the most vulnerable families, GOAL is providing seeds, fertilisers and appropriate training to thousands of households.

GOAL first began operations in Ethiopia in 1984 in response to a widespread famine. In 1987, GOAL registered as an international implementing NGO in Ethiopia, and has been delivering a range of relief, rehabilitation and development initiatives throughout the country ever since.